A party of nine people were searching for Brooks Koepka's ball in the rough during the CJ Cup. 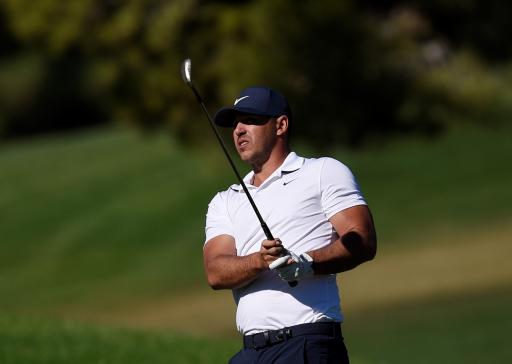 Golf fans have reacted on social media after a video was posted of Brooks Koepka searching for his golf ball during the third round of the CJ Cup at Shadow Creek.

It's a sight we are typically used to seeing at the Open Championship and not in Las Vegas, but when Koepka's ball landed in the rough after trying to drive the green, it took a nine-man search party to find it.

The par-4 11th hole at Shadow Creek is driveable for the PGA Tour's big hitters, so it was no surprise to see Koepka going for it on Saturday, although he came up a little shy.

Koepka's ball landed in the high grass near the bunker and four marshals were quick to get to the area to start the search. The grouping of Koepka, Rory McIlroy and Kevin Na then arrived and joined in and at one point the search party grew to nine people.

Watch the video below to see the crazy ball search for yourself:

@BKoepka’s ball disappeared into the rough after becoming embedded.

The search party refused to be denied. pic.twitter.com/KZwWqNk1Jy

Eventually, one of the volunteers found something and said "Titleist?" to which Koepka replied "Yep" and everyone involved started laughing about the situation.

Had Koepka not found his ball, he would have had to make his way back to the tee, a situation that Rickie Fowler found himself in on that hole and he walked away with a double bogey.

Luckily for Koepka, the ball was embedded meaning he was able to take a free drop which resulted in a nice birdie for the four-time major champion.

A video of the mad ball hunt was posted on Twitter by the PGA Tour, which caused quite a stir with golf fans.

This is the dumbest thing I've ever heard. If everyone there is tested daily and all of them have had multiple negative tests then guess what, the people we know don't have it are right there...and don't need to worry about the others having it...

Rules purists would lose their minds, but in my group, we call that a "Ball Missing But Obviously Not Lost." Drop another, and play on.

Rory lying down on the ground helping look for the ball is ....
What a legend.

I don’t like ANYONE helping a pro find a ball. If they can’t find it themselves then hit another and take the penalty.

NEXT PAGE: Tyrrell Hatton gets UNIQUE RULING in bunker during CJ Cup due to Jon Rahm