Jon Rahm caused Tyrrell Hatton to call over a rules official during the second round of the CJ Cup, due to a bizarre bunker incident. 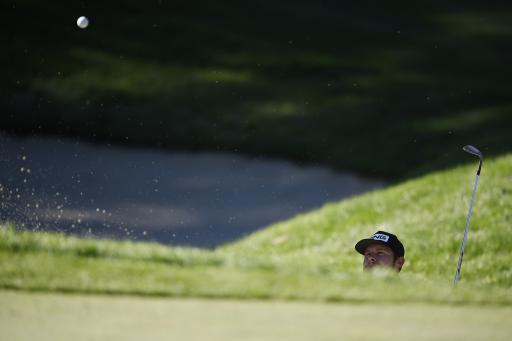 We've seen a lot of rules incidents on the PGA Tour over the past year, but the one involving Tyrrell Hatton and Jon Rahm during the second round of the CJ Cup was definitely something I haven't seen before.

Hatton, who recently won the BMW PGA Championship - the European Tour's flagship event, put in another excellent performance on the PGA Tour in Las Vegas, but during Friday's second round he was involved in a very unique ruling involving a bunker and some grass.

The Englishman's second shot at the par-4 11th at Shadow Creek found a greenside bunker, whilst his playing partner Rahm had found the rough just behind the bunker from the tee.

Rahm played his second shot onto the fringe of the green, but a huge divot came out of the thick grass where his ball had lay to rest and it just so happened to land right on top of Hatton's ball in the bunker.

“We thought this game was hard enough,” said one of the Golf Channel announcers.

Hatton and his caddie then called over a rules official to see what he could do in this unique situation. Watch the incident for yourself in the video below:

In this scenario, Hatton was allowed to pick up his ball, have the area of the bunker raked, before replacing it back in its original place.

The World No.9 then played his next shot beautifully, although he missed the putt for par and walked away with a bogey.

Let's take a look at the R&A ruling for this situation.

- A player's lie or area of intended stance or intended swing is worsened when another player's stroke creates a divot or deposits sand, soil, grass or other material on or around his or her ball.

In all such situations, the player is allowed to restore conditions without penalty, but is not required to do so.

NEXT PAGE: How much Jason Kokrak and every player won at the CJ Cup...