Bryson DeChambeau pulled off a Kevin Na style putt but without even looking at the ball. 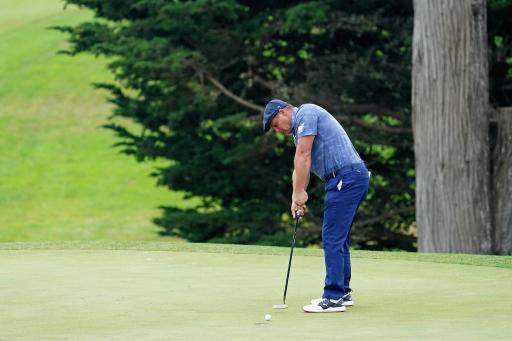 Bryson DeChambeau received mixed reviews after he copied Kevin Na's famous walk-in putt but did so whilst staring into Na's eyes during the BMW Match Play Challenge.

The charity match play event prior to this week's BMW Championship raised $193,000 for the Evans Scholars Foundation, where DeChambeau made a birdie at the last to win alongside Na as they faced Max Homa and recent PGA Championship winner Collin Morikawa.

Not only did the BMW Match Play Challenge raise a lot of money for charity, but it also provided some entertainment with all four players wearing mics, meaning we could hear every word the four PGA Tour players were saying.

During one hole, DeChambeau faced a 6ft putt, with his playing partner standing beside him and the six-time PGA Tour winner decided to have a little fun with it.

Just before he started his back-stroke, DeChambeau looked Na in the eyes and received a smile in return. Once he had made contact with the ball, DeChambeau walked his ball into the hole, in classic Na style.

Na posted a video of the putt on his Instagram page, along with the caption: "This is what you'll see tomorrow! The no look walk in!" Watch the video for yourself below:

The video received a lot of responses from golf fans, so check out some of the replies below, or click on the Instagram post to see more.

"I've never hated someone's putting stance more than Brysons. Don't get mad at me either I like Bryson but man it looks do dumb."

"That’s one way to speed up his pace of play."

"Good thing no one was talking while he was putting, remember Kevin sound travels!"