You never know what creatures you can find on the golf course... 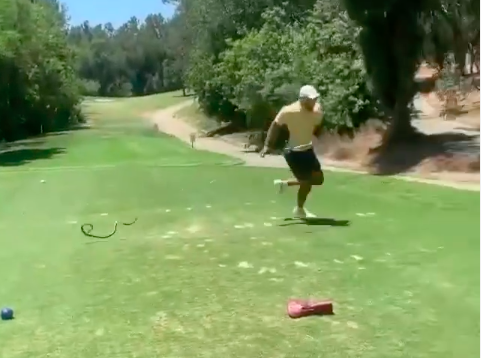 In certain parts of the world, you can come across a range of different wildlife on the golf course and sometimes it is extremely dangerous wildlife.

On many occasions on the PGA Tour, we have seen alligators walking across the fairways but we have rarely seen snakes slithering through the dunes and grass.

This was the case for one golfer, or even, this golfer thought it was the case when he was sent running around the tee box away from what he thought was a blood-thirsty snake.

Instead, it looks as though one of his sick-minded playing partners attached a fake snake with a string attached to the shorts of the golfer and then pointed out that there was a snake sat next to him.

As we would all do, we would run from what could be a venomous animal and because the fake snake is attached to his shorts, it looked as though the snake was chasing him around the tee box.

The joke eventually hit home to the terrified golfer, who used some choice words towards his friends who had well and truly stitched him up.

"Always a classic prank. Never gets old," one fan commented.

"Sheesh! With the matching uniforms," another fan said.

"When he notices it the second time lol," another fan commented.