It is not every day that you see a Jedi at the driving range... 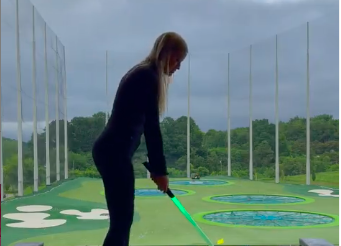 Golf is an extremely hard sport at the best of times when people are using their normal clubs, let alone something as thin as a lightsaber.

Justine Ezarik, better known as iJustine, took one of the famous weapons from Star Wars to a TopGolf driving range to show off her skills in golf and also lightsaber handling.

Justine is an American YouTuber, host, author and actress. With over a billion views across her YouTube channels since 2006, she has become an extremely popular figure in the vlogging world.

It also seems that Justine is a talented athlete and golf enthusiast. Before she takes a swing at her ball with the lightsaber, she shows some sharp moves that would make her a perfect Jedi.

It is not every day that you see someone attempting to hit a ball with a weapon from a popular film series, but different people at driving ranges can throw up all sorts of surprises.

Justine appeared to be at a TopGolf driving range which has proven to be extremely popular in recent years for golfers who want a different type of challenge.

"LOL. This was awesome haha unexpected," one fan said.

"Lol I didn't even notice the end until like the 3rd time," one fan commented.

"An elegant weapon, for a more civilized golf…" another fan said.

"The Force is strong with you," another fan commented.

"If star wars see this they will unsubscibe to your channel," one fan said.

NEXT PAGE: HOW MANY DIFFERENT BRANDS DO YOU HAVE IN YOUR 14-CLUB GOLF BAG?