Caroline Wozniacki plays golf at the Casino Square in Monaco. 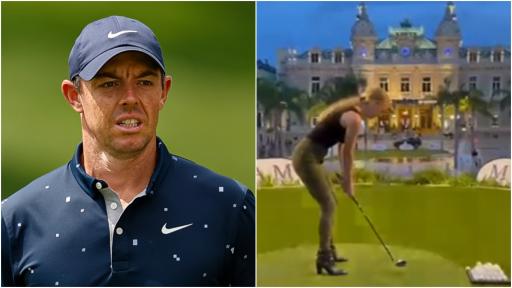 Rory McIlroy's ex girlfriend and tennis ace Caroline Wozniacki was spotted hitting a golf shot in high heels at Casino Square in Monaco over the weekend, and her followers were left particularly impressed.

Wozniacki took to Twitter to post a video of her 'Nearest The Pin' attempt with the caption: "Not every day you get to play golf at the casino square!"

Not every day you get to play golf at the casino square! #closesttothepin #watchtilltheend pic.twitter.com/78FIR4sAFG

Here's how a number of her followers reacted to the shot:

Wow impressive, to play golf in those heels lol

We love to see it! pic.twitter.com/5Vu5WOPuyI

The Northern Irishman then ended the relationship some five months later, and then three days later went on to win the BMW PGA Championship at Wentworth.

"I thought at the time that being with someone that was in a similar position to you was the obvious answer," McIlroy told the Irish Independent back in 2017.

"But it isn't, because you can never get away from it. You can never detach yourself and try to come back to the real world."

NEXT PAGE: TIGER WOODS TO GIVE MOTIVATIONAL SPEECH AT THE RYDER CUP