Ryder Cup: Meet the WIVES and GIRLFRIENDS of Team Europe

You know all of the European players and their careers, but what about their partners who support them week in and week out? 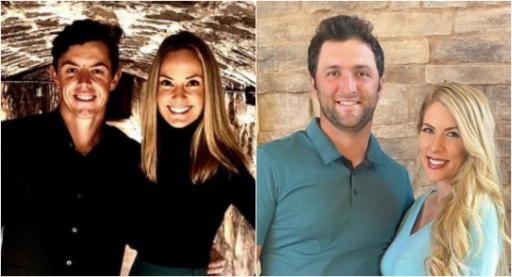 Every Sunday on the PGA Tour and the European Tour, a new winner is crowned and they are presented with a trophy and do a victory speech.

However, the best moment of each win is when the winner celebrates their day with their partners and this is what it is all about.

We have been fortunate enough to meet some of the wives and partners of Team Europe down the years when they have picked up their respective victories, but we aren't aware of all of their stories.

The families and partners of the players play a very important role at the Ryder Cup and they travel near and far to show that support.

Meet the wive and partners of Team Europe.

Rory McIlroy and Erica Stoll got married in April 2017 at Ashford Castle in County Mayo, Ireland and their daughter Poppy was born in September 2020.

Erica is a former employee of the PGA of America as the Manager of the Championship Volunteer Operations in 2011. The pair began dating in 2014.

Jon Rahm and Kelley Cahill attended Arizona State University in America. The pair lived together for two happy years and in December 2019, they got married in Bilbao, Spain which is near to Rahm's home town of Barika.

Before The Masters in April, Kelley gave both to their first son and child Kepa.

Ian Poulter and married his wife Katie Poulter in 2007 and the couple have four children and live on Lake Nona Golf & Country Club in Orlando, Florida.

The pair met in 1995 when Katie was working as a nurse and they are one of the longest-standing couples on the PGA Tour.

RELATED: IAN POULTER ON TEAM USA: "SIX OF THEIR GUYS WILL FEEL THEY HAVE TO DELIVER"

Matt Fitzpatrick is dating Deniz Khazaniuk who is an Israeli professional tennis player who competes on the ITF Women’s Circuit.

She has won 21 singles titles and her career-high rank on the WTA is 200 in singles which she achieved back in 2018.

Lee Westwood and Helen Storey got together in late 2015 after Westwood got divorced from his wife and they got married in Las Vegas earlier this year.

Storey is from Newcastle and is a fitness consultant but also, since 2018, she has caddied for Westwood apart from the odd occasion when his son Sam has been on the bag.

Bernd Wiesberger and Claudia Steinmann have been dating since 2013, but in terms of their public presence, they keep a fairly low profile.

The couple have appeared at other sporting events before, such as the Formula One Austrian Grand Prix.

Sergio Garcia and Angela Akins Garcia got married in 2017 and they have a daughter and a son together. Angela is also a handy golfer herself with a handicap of 3. She played in the golf team when she went to the University of Texas.

The American has also presented and reported for the Golf Channel and it was while working in this role when she met the 2017 Masters champion.

Before becoming Fleetwood's manager, Clare grew up in Manchester and worked in the sports management business at Hambric Sports Management.

The pair got married in 2017 and Clare has two sons from a previous relationship and one with Fleetwood, who was born three months before they got married.

They live together in Clara, County Offaly in Ireland and Wendy works as a nurse.

Tyrrell Hatton and Emily Braisher got married earlier this year. Emily graduated from Nottingham Trent University and decided to travel with Hatton around the golfing world.

She has a blog called Wife on Tour which she describes the ups and downs and details of travelling with Hatton on the PGA and European Tours.

Paul Casey and Pollyanna Woodward got married in 2015. The pair live in Arizona and have a son called Lex and a daughter called Astaria.

Woodward has had a range of jobs in her life, such as working as a technology correspondent for TalkSPORT, a writer for How It Works magazine and she is arguably best known for her role as a co-presenter on The Gadget Show.

Viktor Hovland, the World No. 14 and Norwegian Ryder Cup debutant is currently not seeing anyone as far as we are aware.