Saul 'Canelo' Alvarez is not just a fantastic boxer, but he is also a very keen golfer. 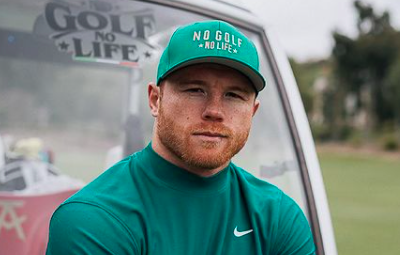 Saul 'Canelo' Alvarez is arguably one of the biggest stars in world sport right now, as he reigns as the pound-for-pound king in the boxing world.

After beating a world-class opponent in Englishman Billy Joe Saunders last time out, he now holds the WBA, WBC, WBO and The Ring Magazine super-middleweight belts.

His freakish rise in the boxing world has been remarkable, but people who know and follow Canelo on social media will know that he is also a very keen and impressive golfer.

WAIT FOR IT. @Canelo with the . #ACCGolfpic.twitter.com/noJmEIRiN6

This week, Canelo played alongside NBA player Steph Curry in the Pro-Am of the American Century Championship in Edgewood Tahoe South in the United States.

The mighty Mexican thrilled the fans with his skills and the highlight of his round was when he holed a great putt for eagle, which brought a big cheer from the gallery.

In true Canelo style, he celebrated the putt by showing off his hand speed and throwing a couple of punches at what was a frightening pace.

"Canelo is more popular than Tiger Woods," one fan said.

"Who cares... Canelo not even 1/6th as popular as Floyd," one fan commented.

"Didn’t he just win a pro-am tourney a few weeks back? Bro is pretty legit," another fan said.

"Nice putt... But that hand speed… Was it 8 punches then the cross," another fan commented.

"Nah!!! Hahaha he’s harder than me and a better golfer! What a cruel world," one fan said.