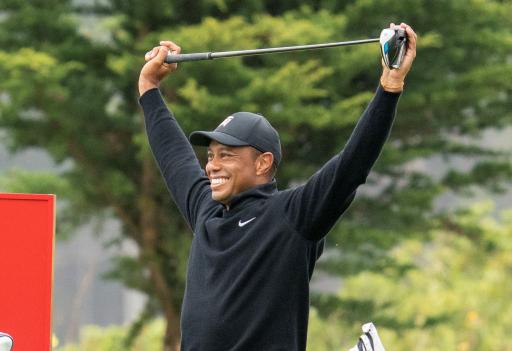 Charlie battered the field last week when he shot 3-under par for the nine-hole tournament, to win by five shots and now he's made it back-to-back victories after shooting 1-under par on the South Florida junior golf circuit.

It was another nine-hole tournament in the 9-11 age division, where Charlie won by three shots and was once again the only player in the field to shoot below par.

During Charlie's first victory, he had the luxury of having his Dad caddie for him, something that Tiger likes to do when he can, but this time Charlie did it without the 15-time major champion by his side.

Tiger was a little preoccupied playing in The Northern Trust, the first of three FedEd Cup play-offs, where Woods shot a 6-under par final round to finish T58.

Woods is currently 57th in the FedEx Cup standings, meaning he has qualified for the next play-off at the BMW Championship, should he choose to play in it.

In a recent interview with Golf Digest and GOLFTV, Woods had this to say about his son's potential:

“I’m still winning … for now,” Woods said. “He’s starting to get into it. He’s starting to understand how to play. He’s asking me the right questions. I’ve kept it competitive with his par, so it’s been just an absolute blast to go out there and just be with him. It reminds me so much of me and my dad [growing up].”

Woods was then asked if Charlie could break any of his father's records, to which Woods replied: “I don’t know. It depends how bad he wants it. It’s all on him. I wanted it at a very, very early age. I wanted to compete and play in this game. That’s on him—whether he wants it or not.”

It didn't take long for Charlie's back-to-back victory to become the hot topic on Twitter, with golf fans once again getting excited about the prospect of Charlie one day playing on the PGA Tour.

Shot -1 yesterday to win by 3. It’s his second straight victory in a junior tournament. Won by 5 last week.

Combined -4 over his last 18 holes of tournament golf. He is 11 years old.

This kid is a player. pic.twitter.com/IT6gSKFHaG

Can I put a future on Charlie Woods to win the Masters now or?

In about 20 years, Charlie will be chasing his 10th major while D. Custer, a journeyman pro toiling on the mini-tours, makes a heroic charge to force a playoff at the PGA Championship.

How do we get Charlie Woods’ tourneys televised?! I’d pay to watch!

NEXT PAGE: Bryson DeChambeau tells someone to "QUIET DOWN" during Northern Trust