Charlie Woods, son of Tiger, demolished the field in a 9-hole junior event and it has caused a stir with golf fans on Twitter. 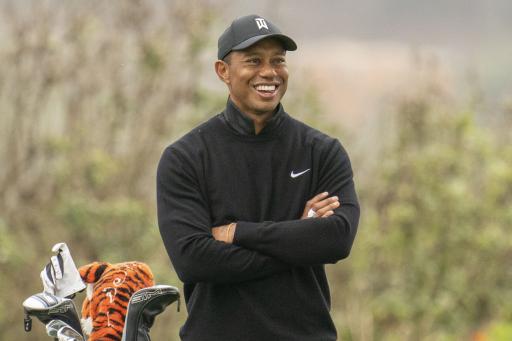 Golf fans are getting excited on Twitter after seeing Tiger Woods' 11-year-old son Charlie win a 9-hole junior event, where he shot 3-under par to win by five shots.

He may be just 11 years old but if there is anyone who can coach Charlie to have the right mentality and not feel any pressure, it's a 15-time major champion.

Imagine playing in a junior competition and seeing the beautiful swing that Charlie possesses and then seeing the greatest golfer of all time carrying his bag. Frightening.

In a US Kids Golf-sanctioned event at Hammock Creek Golf Club, Charlie Woods demolished the field in the nine-hole event, winning the boys 11-year-old division after shooting a 3-under par score of 33 on the 2,467-yard track.

Charlie played a faultless nine holes, making three birdies and no bogeys, something his Dad has done on multiple occasions.

Tiger previously spoke very highly about his son's flexibility and swing, stating that he wished he could move like his son.

“I wish I had his move,” Woods told GolfTV back in July. “I analyse his swing all the time. I wish I could rotate like that and turn my head like that and do some of those positions, but those days are long gone, and I have to relive them through him.”

As the scoreboard began to circulate on Twitter, golf fans started getting a little excited about the prospect of a "second coming" and the idea of one of golf's greatest icons passing the baton to his son in the future.

Imagine being this guy think oh great I need to caddy for my son on this Sunday I wish I was playing instead. You get to the first tee and get to spend the day with TIGER FUCKING WOODS. Like people would pay ridiculous amounts of money for that opportunity and you just get lucky. pic.twitter.com/15FgkEOaGE

Tiger vs Charlie coming down the stretch at The Masters 2030.

Wayyyyyyyyyy too early to speculate warning, but how cool would it be to see Charlie win the Masters (or any big tournament) with Tiger on the bag?!?!

With all due respect, I don’t care about Jim Herman, show me Charlie Woods’ footage from today’s outing

Imagine showing up for your kid’s US Kids Golf event and seeing Tiger Woods waiting at the first tee...

Just wow.... I suspect Charlie Woods is a name we will get to hear a lot of in the future, if nothing else, he certainly knows how to recruit an experienced caddy! #wonby5 #moveoverdad pic.twitter.com/WC7JZLT3jT

The other kids don’t stand a chance. Unless they can ask Charlie’s caddy for some pointers.

How cool is that. From playing in the PGA championship to caddying for your kid

NEXT PAGE: Tiger Woods confirms he will play in The Northern Trust