Golf rules: What happens when an UNRULY baby crawls to your ball and holes it?!

This is what you need to know if you are ever faced with this situation that could get out of hand! 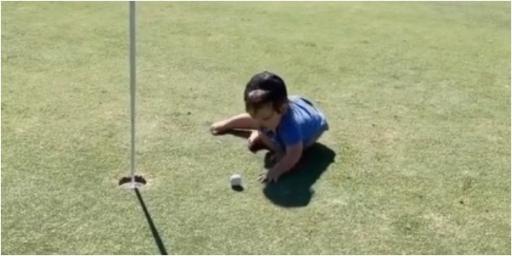 There have been some example of golf fans invading the course over the years.

Think of what happened at Torrey Pines at the U.S. Open earlier this year when a partially-clad fan ran onto the fairway.

The invader ran in front of Bryson DeChambeau wearing shorts and a pride shirt with a club and two golf balls and duly swung away.

The fan hit one shot, danced, then hit another and ran off as a security guard came closing in to the amusement of many.

So what happens when an unruly spectator crawls onto the green, dribbles on your ball then places it in the cup?

It's an outrageous piece of behaviour and one that demands the harshest of penalties and a permanent ban.

A golf video has gone viral on Instagram on the popular @golfrules_questions.

Usually, the page is dedicated to answering interesting questions when fans are presented with odd situations.

These situations usually involve balls being stuck in trees, odd situations in bunkers or players doing hilarious things with their tee shots.

But this time the video shows a man putting towards the flag stick which is left a little bit short.

The babe then decides to crawl over and pick the ball up before putting it directly in the hole.

Handcuffs are necessary in this situation if things get out of hand.

So what is the exact ruling?

The player's ball came to rest and then was moved (by an outside influence).

The ball must be replaced and then the spectator removed.

NEXT PAGE: HOW TIGER WOODS' CHIPPING CAN HELP YOU