Golfer puts a HOLE in his driver as training drill goes BADLY wrong!

Golfer has a shocker with his TaylorMade driver on the range... 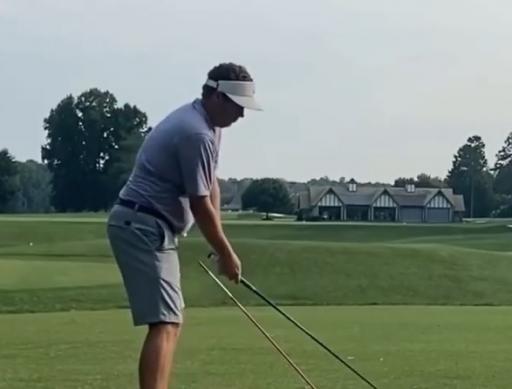 A golfer was left red-faced on the practice range last week after he broke the head of his driver when attempting a golf swing training drill for the first time.

It might be a practice drill that the likes of Rory McIlroy and other PGA Tour pros have used in the past, but it's fair to say this golfer won't be trying it again - not judging by the state of his TaylorMade M4 driver head at least.

The golfer in question sets himself up with an alignment stick in position to get him taking the club back and through on his desired swing path, only his driver clatters against the stick on the downswing, causing all sorts of chaos in the process.

Here's how a number of golfers reacted to the video:

"Pro tip, do this drill if you are bad at golf."

"Mr Gilmore accomplished that feat no more than an hour ago."

"I used this angle with the alignment stick drill, the trick is you just move it away from you to the right more; it still gives you visual plane feedback without hitting it."

"What's the point of this drill? Make sure you swing over the top?"

"Well, he definitely shallowed the club."

"Look at the state of his driver head!"

"Why would anyone do this drill, it doesn't even make any sense?"

"What was he trying to do there, make sure he hit a raging slice?!"