Graeme McDowell apologises to ref after "throwing him under the bus" 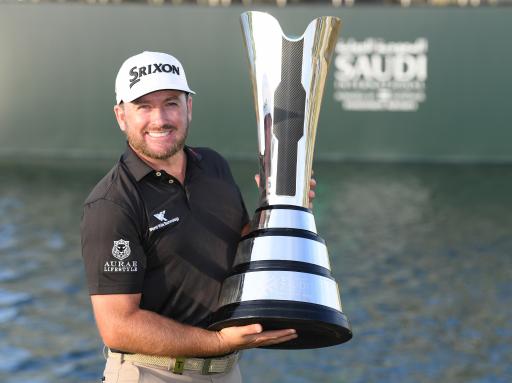 Graeme McDowell has apologised to European Tour referee Andrew Snoddy after bemoaning his decision to give the Northern Irishman a slow-play warning on day two of the Saudi International, which he went on to win.

McDowell, 40, pointed to be out of position following an on-course interview he agreed to have with Sky Sports Golf's Tim Barter on his way down the fairway at the par-4 sixth hole.

"I had just done the interview so I was 50 yards behind the guys [playing partners]," said McDowell on Friday. "I got up there, was first to go and I had 215 yards into the wind. It was a difficult shot.

"I thought he [Snoddy] would have given me the benefit of the doubt, but he was like, 'no that's a bad time'. I'm like 'brilliant mate'."

The European Tour then made it clear to McDowell that he was in fact 34 seconds over thr 50-second time limit to play a shot.

Under the new rules set this season, two strikes mean a one-stroke penalty. Thankfully for McDowell he did not suffer any more warnings over the weekend and therefore did not receive a penalty.

Following his comments during his slow-play warning, McDowell wanted to clear the air with the European Tour referee in question.

"I just want to apologise to him [Snoddy]," said McDowell.

"I felt like I threw him under the bus. He's trying to do his job and the referees on the European Tour run a brilliant show.

"I feel like he kind of got the brunt of the negativity that was created, that I caused him and I want to apologise to him.

"I felt like there were extenuating circumstances. They [European Tour] stood by their guys and hey, they are trying to apply the Rules of Golf.

"No hard feelings on my end. Once that was resolved, we moved on.

"Big shout out to the European Tour referees and everything they do for us."