Gus Andreone, the oldest member of the PGA of America, dies aged 107 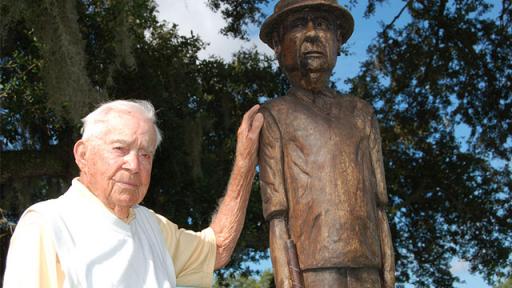 The oldest member of the PGA of America, Gus Andreone, has passed away aged 107.

Andreone, who worked for more than 90 years in the golf industry and became a PGA of America pro in 1939, died on Saturday in Sarasota, Fla., after recently suffering a stroke.

“Gus Andreone’s remarkable life was filled with a love of country and for the PGA of America,” said PGA of America president Paul Levy.

“Gus fought valiantly in World War II and when he returned home brought a special passion to teaching and promoting a game that he would play for more than eight decades. Our heartfelt prayers go out to his wife, Betty, and family as we pay tribute to an unforgettable PGA Professional.”

Just as he was settling into a career in golf, Andreone was drafted into the US Army at age 31, becoming a member of the 61st Armored Infantry Battalion, 10th Armored Division.

Discharged after the war, Andreone returned to golf and eventually became head professional at Edgewood Country Club in Pittsburgh in 1947, a job he held for 34 years.

Andreone made eight holes-in-one during his life, the first coming in 1939 and the last in 2014 at age 104, when he used a driver from 113 yards on the 14th hole at Palm Aire Country Club near his retirement home in Sarasota, Fla.

“The job you have in golf is working with people,” Andreone once said. “You treat them all the same if you intend to be a professional. Personality is very important. Treat them alike and learn all you can about your business. Remember that the juniors are the members of tomorrow. You treat your members with fairness and respect and it will come back to you tenfold.”

Andreone is survived by his wife, 101-year-old Betty Andreone, 14 nieces and nephews and their families.