Harry Kane CHIPS IN TWICE IN A ROW during England golf chipping challenge! 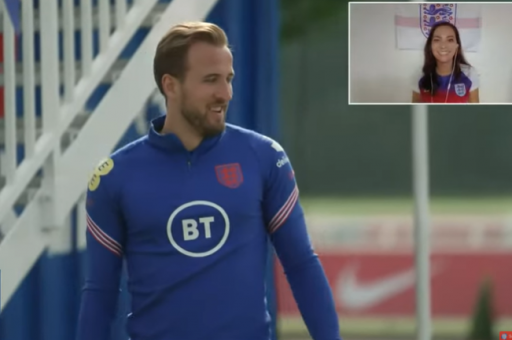 Harry Kane was back on the scoresheet for England in their memorable 2-0 victory over Germany on Tuesday night, and also on target when it came to a golf chipping challenge on Wednesday!

Kane, who like Wales footballer Gareth Bale is an avid golfer with a single-figure handicap, joined Josh Denzel on Lions Den ot recap an unforgettable night at Wembley Stadium on Tuesday, and breaking his goal drought.

AJ Tracey then joined the show to talk about Kane being a role model, football and music, before Kane showed off his incredible golf skills.

"We are playing pinball now"

Harry Kane shows his talent is not confined to the football pitch! pic.twitter.com/VH2v9yywfT

WATCH THE FULL VIDEO BELOW ON THE ENGLAND YOUTUBE CHANNEL

Kane now moves top of the chipping leaderboard with 13 points.

Liverpool's Jordan Henderson is next up with 7 points, followed by Chelsea's Mason Mount.

Man City's John Stones and West Ham's Declan Rice are next up with 3 points, one point ahead of former England legend Peter Crouch.

England will now face Ukraine in their crunch quarter-final match in Rome on Saturday night, with the winners then facing Denmark or Czech Republic in the semi-final at Wembley next week.

Should England reach the Euro 2020 final, they will face either Belgium Italy, Spian or Switzerland, once again at Wembley.

England's Raheem Sterling has netted three times so far this tournament, and is just two goals behind Portugal's Cristiano Ronaldo in the race for the Golden Boot.

Kane has just the one goal, but will no doubt still be eying the chance to win the prize, especially after topping the chart at the 2018 World Cup.

NEXT PAGE: PETER FINCH HITS BACK AFTER CRITICISM FROM RICK SHIELS AND HIS MANAGER