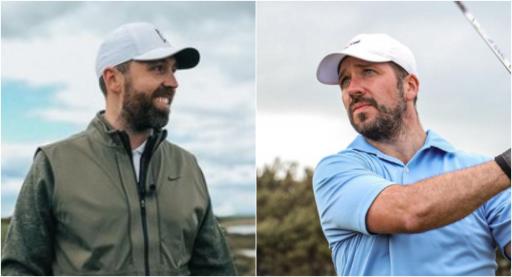 On the podcast, Shiels and Charnock discussed what they described as 'the elephant in the room', as Finch failed to get past Regional Qualifying for this year's Open Championship at West Lancashire Golf Club in Liverpool.

The pair talked about how difficult the qualifying process is for The Open, which is to be held at Royal St. George's later his month. As a video creator himself, Shiels also delved into how different the golf YouTube world is when compared to competitive golf.

"All you need to do, and I use that term loosely, is have the three rounds of your life and you're in The Open," said Charnock.

"Even for him (Finch) who just wants to get through the first bit, he could shoot 1-over-par round there, I'm sure he could.

LISTEN TO THE PODCAST HERE

Unfortunately for Finch, he shot 7-over-par in the Regional Qualifying round which was well off the mark to make the next stage, which shows how hard it can be to progress to golf's oldest major.

As well as Finch, there were other content creators in the golf world who tried and failed to qualify for The Open too and so this stimulated a question for Shiels and Charnock as to whether it was possible to be a competitive golfer and a popular golf YouTuber at the same time.

I certain in the room we need to talk about @RickShielsPod pic.twitter.com/cK5hRlytTJ

"I am in my absolute element when I am in front of the camera and talking," said Shiels.

"When I played competitively as a YouTuber, I found it very different to just playing golf on camera.

"When playing competitive golf, when you know you've got an audience that is following you and want to know your result, I found that if it was going well, I was already thinking, 'What's going to be in my Instagram post after this round of golf?' "

Shiels added, "This is probably a question for Pete, where do you draw the line and say, 'I don't know if I can shoot low enough?' "

As you can see by the tweet above, Finch did take part of what was said on the podcast personally, to which Shiels immediately replied to say that this was not the intention.

Unfortunately, some golf fans aimed angry reactions towards Shiels and Charnock on social media to which Finch implored them not to.

Finch and Shiels have created superb video content together in the past and I think I speak for every golf fan when I say that I hope they continue to do so in the future.

NEXT PAGE: TICKET BALLOT FOR THE 2022 OPEN CHAMPIONSHIP AT ST. ANDREWS OPENS TODAY!