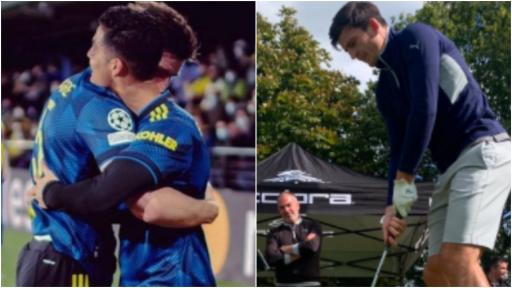 Manchester United captain Harry Maguire celebrated a much-needed clean sheet and his side's qualification into the knockout stages of the Champions League on Tuesday night by heading straight out for a round of golf on his local track.

Maguire returned home to Cheshire on Wednesday morning following United's 2-0 victory over Villarreal in Spain and then immediately picked up his Cobra golf clubs.

Cristiano Ronaldo scored the first goal of the match before Jadon Sancho bagged his first goal for the club in the final minute.

Maguire is apparently one of the more avid golfers at Manchester United, along with Phil Jones and Scott McTominay.

In the images doing the rounds on social media today, Maguire can be seen playing with a full bag of Cobra clubs and wearing PUMA Golf apparel and footwear.

RELATED: UNITED PLAYERS TEE IT UP AT ST ANDREWS

The England defender is suspended for United's upcoming crunch away game against league leaders Chelsea at Stamford Bridge this Sunday afternoon.

United will then face Arsenal at home next Thursday, before facing Crystal Palace also at Old Trafford three days later.

You signed me for the best club in the world and gave me the biggest honour in football. Huge respect and forever grateful.

Thankyou for everything boss.

United are being linked with a number of big-name managers for arguably the biggest job in world football, with PSG boss Mauricio Pochettino seemingly at the top of their list.

There has also been talk that United could decide to bring in an interim manager until the end of the season, before appointing their preferred option in the summer of 2022.