Bryson DeChambeau gears up for battle in The Match with Brooks Koepka by unleashing yet another rocket! 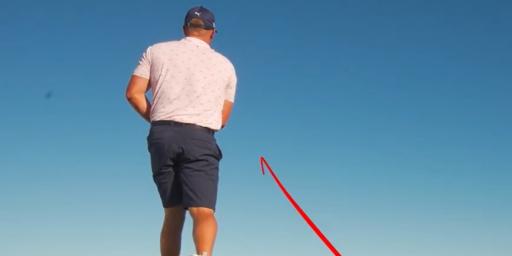 Bryson DeChambeau has warmed up for battle with Brooks Koepka ahead of their 12-hole Match this Friday by smashing a drive 521 yards off the top of a casino.

DeChambeau - who finished seventh in the World Long Drive Championship just days after helping USA win the Ryder Cup at the end of September - let loose from off the roof of a Las Vegas casino and rocketed a drive onto a target featuring Koepka's face.

Just another day in the life of Bryson.

WATCH BRYSON HIT A 521-YARD DRIVE IN THE VIDEO BELOW

.@b_dechambeau was hitting bombs off the roof at a giant @BKoepka target #CapitalOnesTheMatch is Friday, Nov. 26, at 4pm ET on TNT pic.twitter.com/uaWZZTTCrQ

HOW TO WATCH BROOKS VS BRYSON IN THE MATCH

The showdown will be the fifth edition of The Match, a fixture that has become synonymous with the biggest stars from golf and other sports too.

Tiger Woods and Phil Mickelson have featured in the previous renewals, while figures such as Tom Brady, Peyton Manning and Steph Curry have also taken part.

The Match will take place on November 26, the day after Thanksgiving at The Wynn Golf Club in Las Vegas.

Bizarrely, it will be played over 12 holes as opposed to 18.