In worrying pictures, the actor, 34, was seen being helped to his feet by spectators and medical professionals. 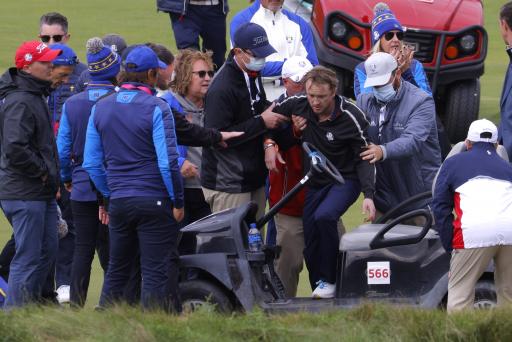 The Harry Potter actor Tom Felton collapsed at Whistling Straits before the Ryder Cup began but is "okay", a friend has claimed.

Felton, who celebrated his 34th birthday earlier in the week, fell to the ground during a celebrity golf match in Wisconsin.

Upsetting pictures showed him looking sweaty and pale as he was helped to his feet by fast-responding spectators.

It is not clear what happened to Felton, who is best known for playing Draco Malfoy in the movie franchise based on the JK Rowling books.

"In today's Ryder Cup Celebrity Match, actor and musician Tom Felton experienced a medical incident on the course while participating for Europe," the PGA of America said in a statement on Thursday.

"He was transported to a local hospital for treatment. No further details are available."

They were playing against 1980 US Olympic hockey captain Mike Eurzione and Olympic speed skater Dan Jansen.

Felton's friend Derek Pitts suggested on Instagram Felton is okay, but there has been no official word as to the validity of that claim.

The actor's social media channels have not been updated since he was seen being carted off the course.

Pitts posted a photograph of Felton on his Instagram stories saying "he's okay" and "speedy recovery brother" alongside a heart emoji.

Hopefully there will be an official comment soon confirming he is on the mend.