But it mattered little as Jordan Spieth and Justin Thomas lost 3&1 to Jon Rahm and Sergio Garcia on Day One at the Ryder Cup. 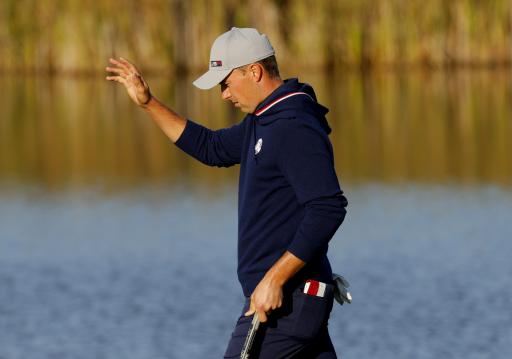 Jordan Spieth hit one of the shots of the season on day one at the Ryder Cup, but it would matter little in the grand scheme of things as he and his playing partner Justin Thomas would go on to lose 3&1 to Jon Rahm and Sergio Garcia in the Morning Foursomes on Day One.

Two down with two holes to play, Thomas found the deep rough at the daunting 223-yard par-3 17th and it left Spieth in all sorts of bother.

With TV cameras struggling to even pick up the ball, Spieth stepped in and thrashed at the ball, popping it up beautifully down to six feet, while running down the hill having been put off balance during the strike.

Thomas misses the par putt though, and Rahm and Garcia guide #TeamEurope to a 1-0 lead in the 43rd Ryder Cup!

WATCH: EUROPEAN FAN DESCRIBES HIS INCREDIBLE JOURNEY TO THE RYDER CUP - AND APOLOGISES TO HIS PARTNER!

Thomas would unfortunately miss the return putt and it would result in a deserved 3&1 victory for Team Europe's Rahm and Garcia.

Garcia incidentally equalled the record for most matches won at the Ryder Cup.

It took the Spaniard's overall record to 23 matches won for Team Europe bring him to 26.5 points won.

That would be the only point for Europe in the morning foursomes session, however, as Team USA won the remaining three matches to move 3-1 up heading into the afternoon fourballs.

NEXT PAGE: RORY MCILROY AND IAN POULTER THRASHED AS TEAM USA LEAD 3-1 AFTER THE MORNING SESSION