WATCH: Bryson DeChambeau hits a spectator with his first shot at Ryder Cup 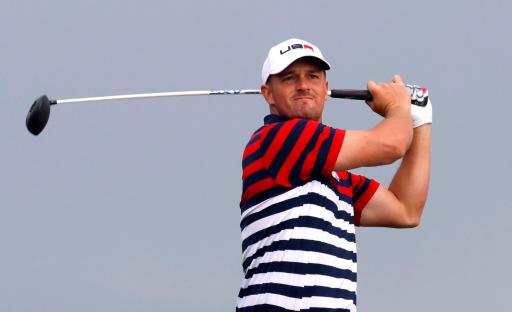 Bryson DeChambeau struck a lady in the ankle with his first shot at the Ryder Cup in the Afternoon Fourballs.

DeChambeau unleashed a drive to the left of the green at the reachable par-4 1st hole, and his ball unfortunately clattered into a lady's ankle.

One swing, one spectator struck

It can't be certain whether DeChambeau shouted 'FORE!' or not given the noise of the crowd.

To DeChambeau's credit, he made a remarkable up-and-down for birdie to halve the opening hole.

He also gave the lady a signed ball as an apology.

DeChambeau missed out on the morning foursomes on day one but was sent out for the afternoon fourballs alongside Scottie Scheffler to face Jon Rahm and Tyrrell Hatton.

Do you really think she was gonna jump up and run for cover? He should obviously shout “fore” but it ain’t gonna change much with crowds. It’s a lot different than alerting an unsuspecting player a fairway over at the Country Club.

bryson dechambeau is the man of the people! the people's champ! #rydercup

Any danger of a fore shout Bryson? #RyderCup

Aaaand Bryson has almost killed somebody

NEXT PAGE: EUROPEAN FAN DESCRIBES INCREDIBLE JOURNEY TO GET TO THE RYDER CUP - THEN APOLOGISES TO HIS PARTNER