PGA professional Steven Hunter, based at Royal Winchester Golf Club, was jailed at Salisbury crown court for his five-year £100,000 fraud. 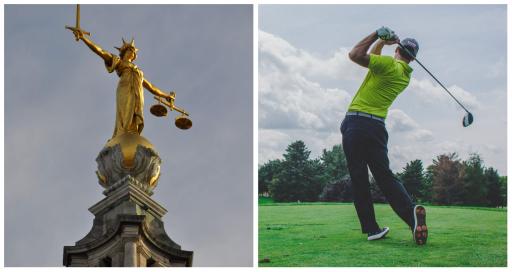 A PGA professional at a historic course has been jailed for five years after he was convicted of defrauding more than £100,000 in club green fees and charity golf days.

His four-week trial heard that Hunter was caught out by club stuff after they discovered discrepancies which totalled £110,000 over five years.

Per a report by The Times via the Solent News agency, an investigation uncovered that £11,000 in profit from two charity golf days went into his own bank account and less than £50 went to charity.

Hunter claimed at his trial that he had made mathematical errors with the green fees and used the money from charity days to pay for other events.

But a jury convicted him at Salisbury crown court earlier in the year. Judge Andrew Barnett jailed him for five years this week for the fraud which he described as "extensive, deliberate and deeply wounding".

He told the disgraced pro: "Your dishonest conduct was over a period of some five years when you were the head professional at Royal Winchester Golf Club.

"You had occupied that post for some considerable period of time, being appointed in the 90s, and obviously attracted a great deal of support and dare I say admiration from the members and along with that a high degree of trust.

"Unfortunately you fell to the temptation, whether motivated by greed or disorganisation that became dishonest, and you exploited the club and the trust they had put in you to some considerable degree."

Hunter's barrister Robert Shaw mitigated: "What he's done has undermined his good name and his work at the club, where he was a loyal member for 30 years.

"He is a family man . . . today has been one of the most difficult days of his life, saying goodbye knowing he will not be returning home."

Hunter was convicted of four out of the five charges of fraud he faced.

He was cleared by the jury of one charge, of which he was accused of lying about his salary to remortgage his £1.6million home.

The court heard he ran the pro shop there through his business Steven Hunter Golf Shops Limited.

His deception was uncovered in July 2018. The club's manager, Stuart Dubber, noticed the green fee takings were incorrect.

Tom Nicholson, prosecuting, previously told the trial: "He consistently under-reported the green fees paid by visitors to the Royal Winchester Golf Club, keeping the difference when his contract said it was the club's money.

"Mr Dubber started comparing the club's accounts to the visitor book, a laborious process, and he felt the issue repeated itself in previous months.

"Green fees were consistently and considerably lower . . . 2018 income should have been about £16,000 up to June when the defendant only reported just over £5,000, about 30 per cent of what had actually been paid.

"He took advantage of the trust he had built up, trust he earned as a longstanding member of the club."

Hunter told the jury he was "shocked" when the fraud was uncovered, claiming he rushed his accounting.

Hunter was convicted of pocketing money for himself on a charity golf day to honour the memory of a longstanding member, named Les Day, who died in 2014.

In addition, Hunter was also found to have cheated the public revenue by claiming VAT on his approximate £30,000-a-year retainer salary at the golf club, despite not having the right to do so.

He was also convicted of false accounting by moving about £345,000 back and forth between his personal account and business account to avoid paying tax.

Hunter, of Abbots Worthy, Winchester, denied but was convicted of four counts of fraud.

Next page: Golfers in bust up with dog walker at UK golf club