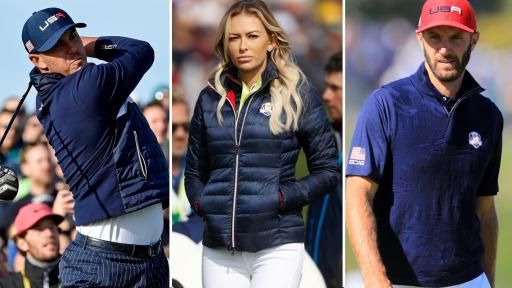 Jim Furyk has revealed Dustin Johnson and Brooks Koepka DID have an altercation on the Sunday night at the Ryder Cup, albeit a "brief" one.

Reports surfaced immediately after the United States' humiliating 17.5-10.5 defeat at the hands of the Europeans in Paris that Johnson and Koepka had got into a heated argument in the European team room - with Johnson's partner Paulina Gretzky also on the scene - before having to be separated by fellow players and officials.

Koepka denied it ever happened at the Dunhill Links Championship in Scotland last week, but United States captain Furyk has confirmed it did, although he did downplay the severity of it...

"Whatever altercation started, or what happened, it was very brief," said Furyk, of the alleged bust-up between Johnson and Koepka.

"It was very short. Neither one of them really took anything out of it.

"They're like brothers. Brothers may argue, brothers get into it. But they're as close as they've ever been, and it really had no effect on either one of them."

Furyk also explained how Patrick Reed knew "weeks in advance" that he would be paired with Tiger Woods - despite Reed coming out and saying he was "blindsided" when finding out that he would be split from Jordan Spieth during the week of the Ryder Cup.

After the Ryder Cup, the Masters champion then verbally lashed out at Spieth.

"When I started looking at who (Tiger) would pair well with, I kept coming back to Patrick Reed," Furyk told the Golf Channel.

"There was always the idea that we could go Tiger and JT (Justin Thomas), and Patrick and Jordan, but ultimately they knew going into the week, weeks in advance, they knew they would start the Ryder Cup with Patrick and Tiger being partners."

PGA Tour
Golf Betting Tips: Patrick Reed to kick off 2022 with a win at Kapalua?
PGA Tour
Paulina Gretzky and Dustin Johnson PARTY HARD as they ring in the New Year
Golf news
The next Phil Mickelson? Nope! WATCH a lefty have an ABSOLUTE MARE on the tee!
PGA Tour
PGA Tour clears the way for players to compete in the Saudi International
PGA Tour
Masters champion Bubba Watson on Saudi Arabia: "They're TRYING to change"