What do you make of this as far as golf etiquette is concerned? 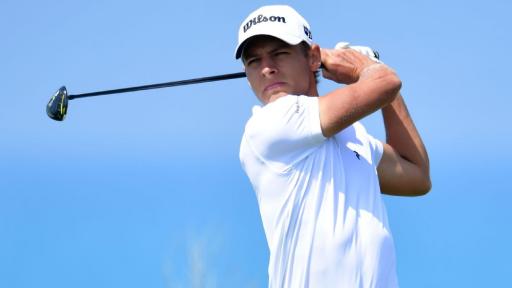 Sweden's Joakim Lagergren has caused a social media debate this week after he was caught slamming his golf club into the turf in order to tee up his ball during the Alfred Dunhill Links Championship at St Andrews on Sunday.

Lagergren went on to finish tied third on 20-under par and two strokes behind eventual winner Victor Perez.

The European Tour posted a clip of Lagergren, instead of teeing his ball up normally, thumping his fairway wood into the tee box at the par-4 7th on the Old Course at St Andrews.

The caption read: "No tee, no problem."

Poor golf etiquette, or a fair action to hit a low bullet down the fairway?

Watch the video clip below to make your own mind up...

Despite having seen the likes of Laura Davies and Henrik Stenson do something similar to this down the years, Lagergren's actions appeared to divide many on social media. Some were in support of the move, while others were fuming...

One tweet read: "How is this better than a tee? Never saw the point in LD doing it or why one would consider doing it."

Other digusted golf fans commented: "Unnecessary and disrespectful,  and "no respect to the greenkeepers who spend hours getting the course perfect."

On the flip side, however, Lagergren had plenty of supporters for hammering his club into the ground.

"Do this with every 3 wood I hit off the tee... more control than having it teed up. Nothing wrong it... easily repairable and within the rules," tweeted one golf fan.

Another tweet in favour read: "Classic links play, keep it low, no tee, sweep it, no divot, do it myself."

How is this better than a tee ?
Never saw the point in LD doing it or why one would consider doing it

People fuming with this. What about when you take a divot

Lagergren not the first to do this. Stenson has done this when he wants to knuckle his 3 wood. Really don’t see the issue here. Not to mention it is no different from taking a divot

Out of order bet greenkeeper not impressed

Do this with every 3 wood i hit off the tee... More control than having it teed up.. Nothing wrong with it... Easily repairable and within the rules

What do you make of Lagergren's actions on the tee box? Are you in favour of it, or do you think it lacks golf etiquette?