Jon Rahm threw his glove away during the first round of the CJ Cup, but ended up fishing for it back. 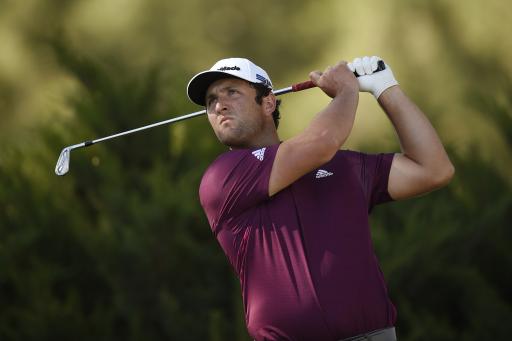 After pulling his drive on the par-5 16th hole at Shadow Creek on Thursday, Jon Rahm took off his glove and threw it in the bin, but shortly after he had his hand in there fishing to get it back out again.

Many professional golfers change their glove once or twice during a round, depending on the wear and tear of it, or if it's got too wet in the rain, but you don't often see them trying to get them back.

Rahm started his round on the back nine and still had 11 holes left to play when he threw his glove in the bin, but he quickly realised he had the wrong size replacements in his bag, due to a slight mix up with the equipment team.

Luckily for Rahm, his wife Kelly came to the rescue as the Spaniard made the turn and provided him with the correct size.

“Things happen. I had the wrong size…, nobody's perfect,” Rahm said following his round. “The one I threw away was just a little too dry, so I was losing grip in the hand and they were too small so I couldn't use them... Not that it affected much. I had to go fish it out of the trash can, that's the only part.”

The World No.2, who can knock Dustin Johnson off of the top spot this week, went on to make four more birdies on his way to a 5-under par round of 67, just two shots behind leader Tyrrell Hatton.

“Played solid out there, played really good, strong off the tee. I think I'm really pleased with the stretch of holes on 18, 1 and 2. To get to 3 under, it just made it a lot easier, gave me confidence and that's why I played the back nine how I did," Rahm added.

Previous
UK golfers invited to Jet2 Madeira with golf club carriage for just £1
Next
FAVOURITE FIVE: The best WINDBREAKERS on the market