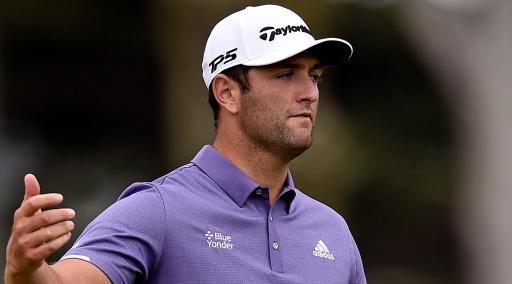 Jon Rahm was assessed a one-stroke penalty following a ball marking error on day three of the BMW Championship.

Rahm sent his approach shot into the par-4 5th hole to 44 feet for birdie but as he walked up to the green and jangled his ball marker in his pocket, he bent over and picked up his golf ball.

On the 5th hole, Jon Rahm incurred a one-shot penalty after forgetting to mark his ball on the green and picking it up.

Jon Rahm tied the low round of the week with a 4-under 66; includes 1-stroke penalty issued on No. 5 for violating Rule 9.4

“I’m proud of being able to maintain my composure afterwards. I think the most important shot of the round was that second putt, the six-footer for bogey.” pic.twitter.com/N9XKJE7Xrh

The Spaniard forgot to put his ball marker down behind the ball before picking it up to clean it like he would normally do, and thus was assessed a one-stroke penalty for his error.

"For some reason I just picked up the ball thinking I marked it already," said Rahm.

"I was thinking of somebody else and something else and I just picked up the ball without marking it, simple as that. Took the penalty and moved on."

The one-stroke penalty was assessed to Rahm under Rule 9.4b/1 after touching his golf ball while it was still in play without putting a marker down behind the ball.

"I really can’t give you an explanation," said Rahm. "It’s one of those things that happen in golf. Never thought it would happen in my professional career, but here we are."

Rahm went on to two-putt for a bogey and ended up shooting a solid round of 4-under 66 to vault right into contention for the second Playoffs event on 2-over par after 54 holes.

"I’m proud of being able to maintain my composure afterwards," said Rahm.

"I think the most important shot of the round was that second putt, the six-footer for bogey on five.

"It’s a really tough golf course out there. It’s really, really demanding. Even if you’re in the fairway you need to hit really, really good shots and I was able to hit more accurate iron shots out there today and have a couple tap-ins like I did on 3 and on 8, which the one on 8 I still don’t know how I hit it that close.

"Hopefully I can carry on with this ball-striking into tomorrow. Hopefully, I’m not too far off where I am right now. I do anticipate somebody playing good today and maybe getting to 3-, 4-under. Five would be a stretch, but I can see 3-, 4-under, and there will still be a lot of shots to make up, but it’s doable.