J.T Poston won his first PGA Tour event on Sunday at the Wyndham Championship, check out what clubs he had in his bag to do so. 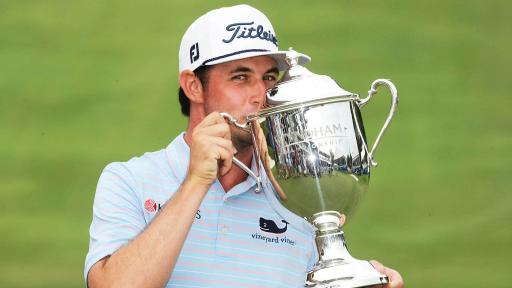 J.T Poston claimed his maiden PGA Tour victory on Sunday, winning the Wyndham Championship at Sedgefield Country Club. The 26 year old stormed through the leaderboard on the final day to finish the round with an eight-under-par 62, leaving him 22-under-par for the tournament.

The focus of the final round of the Wyndham Championship seemed to fall onto Byeong Hun An who went into Sunday leading the tournament and Webb Simpson who trailed by one, but J.T Poston flew well under the radar and stormed to victory with an incredible final round.

Poston tied Henrik Stenson's two-year-old tournament record of a 22-under 258 and became the first player since Lee Trevino in 1974 to finish a four-day tournament without making any bogeys or worse.

''I probably haven't had that many bogey-free rounds this year,'' Poston said. ''To be able to do four in a row is pretty special, and finish it off with a 62 on Sunday is pretty awesome.''

Poston, a native North Carolinian, was three shots back heading into the final round, but three birdies and an eagle on his front nine put him in an excellent position to battle it out with An and Webb. On the 15th hole, Poston sunk a birdie putt to take the lead on his own, before parring into the clubhouse.

An and Webb couldn't make enough birdies to catch Poston, although An came close on 18 when he rammed a 60ft birdie putt in a last ditch attempt of taking the tournament to a playoff, but his putt sailed past the hole and he three-puttedto make bogey, leaving him in 3rd behind Simpson.

''To be able to do it here in North Carolina, with a lot of friends and family, I don't think I could have drawn it up any better,'' Poston said.