Westwood captures his 24th European Tour title and first since 2014 with superb closing 64 in  Sun City. 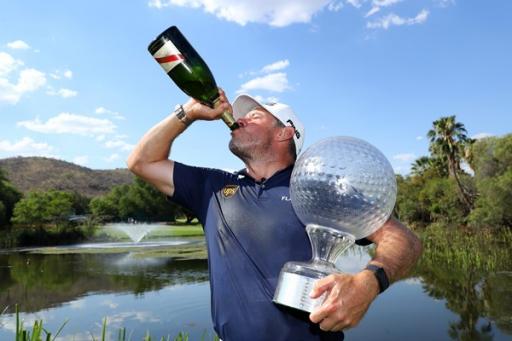 Lee Westwood captured his first victory in more than four years with a three-stroke triumph at the Nedbank Golf Challenge hosted by Gary Player.

Westwood, 45, fired a magical final-round 8-under 64 -  including five birdies on his last eight holes - to clinch a three-stroke victory over long-time leader Sergio Garcia on 15-under par.

The Englishman, who was one of Thomas Bjorn's Ryder Cup vice-captains at the Ryder Cup in September, collects his first ever Rolex Series event and his 24th European Tour title.

It marks his first victory anywhere around the world since lifting the Malaysia Open in 2014.

Westwood's triumph is his third at Gary Player Country Club after the Sunshine Tour's Dimension Data Pro-Am in 2000 and this event in 2010 and 2011 before it joined the European Tour international schedule.

Ever wonder how much winning means to these guys?

“I'm a bit emotional, to be honest,” said Westwood, who had his wife on the bag. “You're never sure whether you're going to be able to do it again.

“Until now my emotions have felt really under control all day which is what I've been working hard on. I was just trying to hit fairways and stick to my game-plan and hit it in the right places.

“I've got a bit of a process that I'm going through with my golf swing and I'm starting to see better shots. The seven iron into 17 is probably one of the best shots I've ever hit."

Home favourite Louis Oosthuizen looked to have put one hand on the trophy when moving two strokes clear around the turn, but stumbled home with a bogey at 15 and double bogey at 18 to finish solo third and four strokes back of Westwood.