‘I’ll stick to driving on the track’ - Lewis Hamilton on golf with Tom Brady. 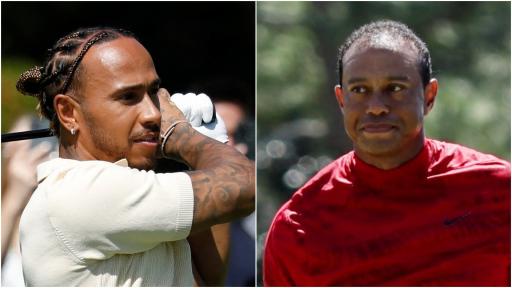 Seven-time F1 champion Lewis Hamilton admits he will "stick to the driving on the track" after competing in a golf challenge with NFL legend Tom Brady ahead of this week's inaugural Miami Grand Prix.

The event, which raised money for underprivileged children in Miami, saw the four of them compete in a longest drive challenge as well as a closest to the pin.

Hamilton, who was picking up a golf club for the first time in three years, had mixed results in the long drive but he took the nearest the pin challenge when pitching his ball to within a few feet.

"Finally I'm going to win something this year," joked Hamilton, who currently lies seventh in the F1 standings this season after an indifferent start to the year on the track.

Lewis Hamilton: "I'm a little bit like Tiger Woods with the putting"

Hamilton says his putting is the strongest part of his game, likening it to that of Tiger Woods.

"I would like to say I'm a little bit like Tiger [Woods] with the putting," said Hamilton.

"I was always so far away from the pin so I was always having to do the long putts, and every now and then I'd get one of those 10 footers, otherwise I was just useless."

Turning his attention to this weekend's race, Hamilton added: "It's our first time here in Miami and the anticipation for this event has skyrocketed.

"There are a few nerves because there's going to be so many people here, it's a new circuit but there's so much excitement."