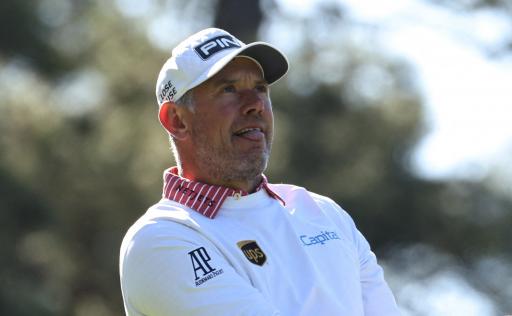 Golf Channel co-host of Golf Today Eamon Lynch has blasted Lee Westwood following his comments as to why he wants to play in the first tournament of the controversial new LIV Golf Invtational Series backed by Saudi millions this June.

Westwood confirmed ahead of the British Masters at The Belfry today that he has requested a release from those above at the DP World Tour and PGA Tour in order to play in the first event of the eight-tournament LIV Golf Invitational Series, which begins at Centurion Club in England in four weeks' time.

But it's fair to say Westwood's comments earlier today have not sat well with many in the golf industry, especially Golfweek columnist Lynch who cannot understand the 49-year-old's reasonsing for wanting to take part in Greg Norman's Saudi-backed golf circuit.

Westwood told Sky Sports: "I think Saudi Arabia are obviously, they know they've got issues, I think lots of countries around the world have got issues and I think they are trying to improve.

He also added: "I'm an independent contractor and I work for myself. It's my job, and I have to do what's right for me."

Lynch was staggered by his choice of words.

Related: Lee Westwood reveals why he has requested a release to compete in the LIV Golf Invitational Series

"We know what the players are interested in here, it's money, it's not really anything more complicated than that," says Lynch.

"But let's be clear what the Saudis are interested in here... it's using golf to normalise the state, to normalise all of their abuses and distract from it.

"And for that, they need two things which is money, of which they have plenty, and willing stooges of which Lee Westwood has just announced himself to be one.

"I was really struck by when he [Westwood] said of the Saudi Arabian regime 'they know they have issues and they are trying to improve'.

"Well perhaps one way Lee Westwood can help his bodies improve is tell them not to execute 81 people in one day, stop firing missiles at civilians in Yemen.

"But Lee Westwood wants to take a pay cheque to play a golf tournament and then say he is somehow contributing to the improvement of the lives of people in Saudi Arabia, which it's not.

"He's right, every other country has issues too, but they're not all trying to use golf to distract from those issues."

Richard Bland also confirmed in his press conference at the British Masters today that he too intends to tee up at Centurion Club for the first LIV Golf Invitational Series tournament this summer.

Should Westwood compete in the LIV Golf Invitational Series then it is understood that it will seriously call into question whether or not he will be permitted to ever become the European Ryder Cup captain in the future. That is not yet official but talks are ongoing right now.

What do you make of players wanting to compete in the controversial LIV Golf Invitational Series backed by Saudi millions? Do you see a major problem with it or are you excited to see how the new series plays out this year? Share your thoughts and comments over on the GolfMagic social media channels now or come and visit us over on the GolfMagic YouTube channel.