Lexi Thompson was ripped on Twitter when someone else shouted fore when she sent a ball towards the crowd at the Solheim Cup. 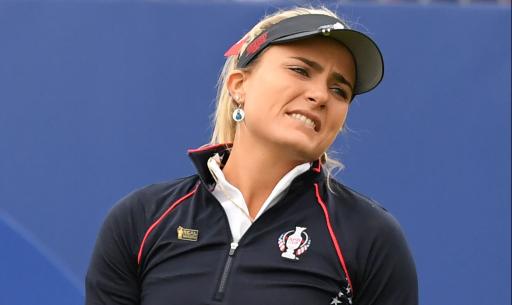 The final day of the Solheim Cup at Gleneagles in Scotland was a day to remember for European fans around the world, as a late dramatic comeback saw Team Europe clinch the Solheim Cup on home soil, but it wouldn't be a Solheim Cup without a bit of controversy.

Lexi Thompson was involved in her own controversial moment a few months ago at the Women's Open, when she caused nearly 40 players to miss their practice round, after she left her passport in her golf bag, causing the driver (who had all the golf bags in his van) to be extremely late arriving at Woburn.

Well on Saturday, Thompson was involved in another incident, but this one has been taken a lot more seriously by golf fans, as it could have actually caused some serious damage to a spectator.

Thompson was trying to play a draw off the tee with her 2 iron. The ball started right as intended, but instead of curling back towards the fairway, it stayed out to the right towards the onlooking crowd. Thompson put her hand in the air to suggest to the marshals that her ball was going right, but she felt it wasn't necessary to shout fore and warn those who might be in danger.

Instead, someone around the tee (it's been reported to have been a marshal on the tee), took matters into his own hands and shouted very loudly "FORE RIGHT!".

Thompson seemed a little annoyed by this and turned her head saying "Jesus, it's not that bad" as if the call was unnecessary. Check out what happened in the video below.

The ball didn't hit anyone, but it really wasn't far away, hence why so many people on Twitter couldn't understand why Thompson decided not to give it a call. Take a look at some of the tweets below.

Not a shout from the player . Seriously how hard is it to shout FORE. Top marks to the caddy for yelling

Shocking attitude @Lexi doesn't matter how bad it is. It nearly killed someone

Yet it missed someone by 2 feet. If it’s bad enough to point it’s bad enough to shout, and shout loud. This may reveal the underlying issue with the non shout. Pro’s are so mentally strong, a shout feels like a shout of shame but a point makes them believe “it’s not that bad”

Sad state of affairs when this is passed off as ‘a classic.’ Basic etiquette is the least that’s expected of anyone each and every time they step onto the first tee. Retrospective fines ought to be introduced to ensure it doesn’t happen again.

Except IT WAS that bad....she was feet away from hitting someone.

Doesn’t matter if it’s ‘that bad’ or not. Your big block almost landed on someone. Absolute stinking attitude from a ‘professional’.