An unsuspecting animal appeared on the fairway of the 18th hole at the International Series Egypt event on the Asian Tour, and thought about tampering with a golf ball. 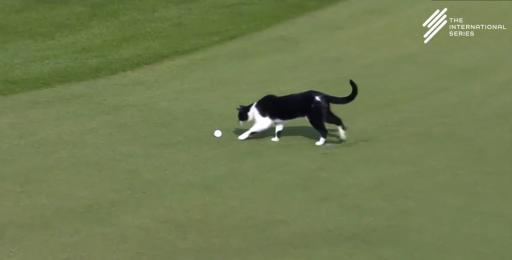 Over the years on the PGA Tour and the DP World Tour, we have seen a variety of different animals play their part in entertaining the crowd, but also frustrating golfers.

Most famously, a seagull picked up Brad Fabel's ball from the green of the 17th hole at TPC Sawgrass in 1998 and dropped it into the water.

Alligators have always made regular appearances in Tour events. In the 2022 season, an alligator gave Callum Tarren the fright of his life at the Zurich Classic of New Orleans.

During the first round of International Series Egypt on the Asian Tour, a cat appeared on the fairway and it was lucky not to have a golf ball land on its head.

Lu Wei-chih was on the tee on the 18th hole at Madinaty Golf Club. He struck a good drive that finished in the fairway and the unsuspecting cat strolled over to his ball, taking a keen interest.

Luckily, the cat decided a close inspection and a couple of sniffs were enough before moving on. Perhaps it was a Top Flite ball and not a Titleist Pro V1?

10 events are set to be played on the new programme each season for the next 10 years. The key aims of the series include driving fan engagement, attracting commercial interest and stabilising professional golf.