PGA Tour player Callum Tarren was walking near the edge of a hazard at TPC Louisiana when he came across an almighty alligator. 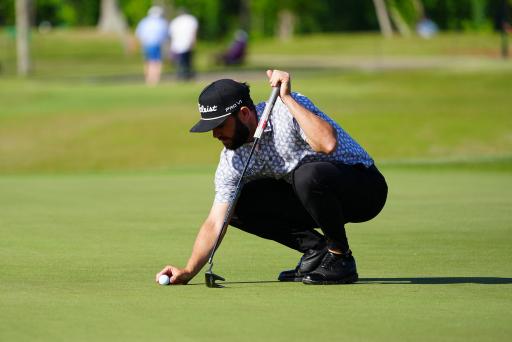 Throughout the week at the Zurich Classic of New Orleans, we have seen alligators stalk the fairways and wander around while stars of the PGA Tour navigate the golf course.

Many of the golfers are unphased by these menacing animals. As long as you keep a safe distance, you can fully concentrate on your game.

However, one player didn't take kindly to an alligator that was laying across the edge of the water near a hazard line at TPC Louisiana.

Callum Tarren was on top of the slope and once he clocked the gator lurking about five feet away, he jerked to his right and ran away.

Englishman by name, Englishman by nature. I'm sure many of us would have reacted in a similar way when we aren't used to seeing such an animal on a regular basis.

Not your typical hazard

Despite Tarren being spooked during the third round of the tournament, it didn't stop him and his partner David Skinns from firing a 63.

Together in the second round of the better-ball format, the pair made nine birdies on a bogey-free card to reach 17-under-par for the event.

Although Tarren and Skinns played impressively on Saturday, they are a huge 12 shots behind Patrick Cantlay and Xander Schauffele on 29-under-par.

The dynamic American duo shot an incredible 60 on day three to take a five-shot lead into the final round which will adopt the foursomes format.

As for Tarren, who has missed nine cuts in 12 appearances on the PGA Tour, he is having a much better week in Avondale as long as he stays away from the alligators.

Next Page: Bryson DeChambeau: "It hurts your heart... You feel embarrassed all the time"