Louis Oosthuizen leads by three in front of a home crowd in South Africa after round one of the Nedbank Golf Challenge. 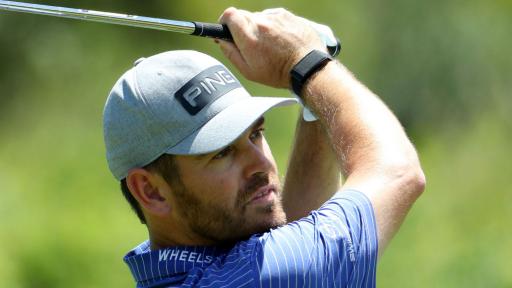 He might have been struggling with illness before the start of the tournament, but Louis Oosthuizen looked as healthy as ever during round one of the Nedbank Golf Challenge in his home country of South Africa, cruising to a three-shot lead.

Oosthuizen took the Gary Player Country Club by storm on Thursday, shooting a faultless nine-under par score of 63, with nine birdies and no bogeys.

A win for Oosthuizen would move the South African up to second place in the Race to Dubai, with the DP World Tour Championship taking place in Dubai next week to decide the winner.

"I just love this golf course," Oosthuizen told Sky Sports. "One of my first wins on the Sunshine Tour was here, the Dimension Data, and every time I play here it brings back a lot of good memories."

Oostuizen, grouped with American Kurt Kitayama and potential Rookie of the Year Robert MacIntyre, started his round with back-to-back birdies, before finding two more before the turn.

The birdie train continued on the back nine, as Oosthuizen made three birdies in a row, with another at 14 and his final birdie of the day at 17.

Defending champion Lee Westwood shot a bogey-free round of 68, to end round one in T4 with South African pair Ernie Els and Zander Lombard.

Shot of the day for round one goes to Lee Westwood as he defends his title in South Africa. The Englishman found himself with what looked like an impossible shot from the bunker, playing his third on a par-4 out of an extremely plugged lie.

RELATED: How to play the plugged bunker shot

PGA Tour
Cameron Champ WINS 3M Open on PGA Tour as Louis Oosthuizen comes second AGAIN!
PGA Tour
Rickie Fowler HITS THE FRONT in first round of 3M Open on PGA Tour
Features
Does Rory McIlroy NEED A BREAK from the game to rediscover his BEST GOLF?
The Open Championship
Louis Oosthuizen LEADS BY ONE heading into final round of The Open
The Open Championship
Louis Oosthuzen LEADS BY TWO heading into the weekend at The Open