How to play the plugged bunker shot

Check out this simple and effective tip on how to escape a bunker when your ball is plugged into the sand. 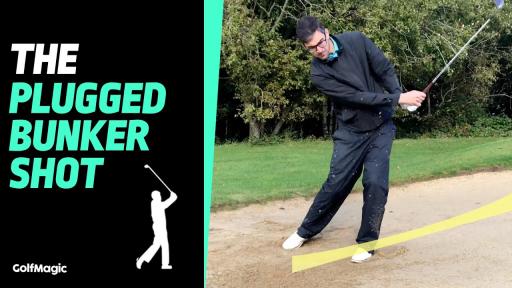 It's one of the most annoying things you can see on the golf course. You've hit a decent shot, but just missed the green, thinking you've got an okay attempt out of the bunker coming up. You get to the bunker and what do you find? Half of your ball sticking out of the sand, it's plugged.

A lot of amateur golfers think that a plugged bunker shot requires the same technique as any ordinary bunker shot, but that's certainly not the case.

Check out this useful tip from PGA Professional Paul Babbage, who explains the technique that he uses to get out of a plugged lie.

As Paul explains in the video, the plugged bunker shot is a challenging one, but the more practice you put into it, the more ready you will be when you come up against this type of shot.

There are different techniques and ways of playing the plugged bunker shot and it's about finding the one that works for you, but Paul's technique is one that he has mastered over the years and a simple one for him to explain to his students when coaching.

It requires a stable and wide stance to keep you balanced throughout the shot, with the ball placed towards your front foot. Instead of opening the club face like you would in a typical bunker shot, Paul recommends closing the club face so it faces your leading foot, which helps the leading edge cut through the sand.

Paul's technique then requires you to hit hard into the sand while moving your weight through the target. So give this technique a go next time you're faced with a plugged bunker shot and see how you get on!

However, it might not rescue you from lies like Charl Schwartzel's back in the 2017 Nedbank Golf Challenge, check out his nightmare bunker shot below: