Shane Lowry fires warning to big hitters ahead of 2018 Open. 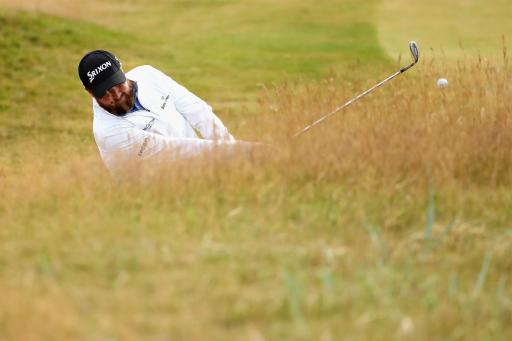 Ireland’s Shane Lowry has fired a warning to big hitters ahead of the Open, saying their power could get them into trouble at a baked Carnoustie.

Players have been left slack jawed at the distances they can hit this week – with Tiger ‘hitting 3-iron 333’ – and by taking driver Lowry believes they will be running out of fairway to play with.

"I think people have a misconception of how this golf course is going to play,” the three-time European Tour winner said.

"I think it is going to play a lot harder than people are seeing in practice. I think the greens are going to dry out and the golf course is like a runway out there.

"If you get the ball off-line, you are going to get yourself in trouble.

"So I think the guys who want to hit drivers everywhere, let them go ahead and if I'm wrong I'll obviously eat my words at the end of the week.

"I don't think it's driver everywhere. I think you need to get the ball in play, get the ball on the short grass and have control with your iron shots then.”

The colour of the grass at Carnoustie...

While the crowds at Carnoustie may cast their eye over the yellowed layout and think it an easy test, the 31-year-old ushers caution.

"Obviously I have played here quite a lot at the Dunhill but it's a bit of a different golf course this week,” he added.

"It's firm and fast and to the naked eye it can look quite easy, but I think it is going to be very tricky this week.

"It is just about keeping your ball in play and seeing what you can do from there.

“If you can hit six, seven, eight, nine fairways around here, I think you're doing very well. From there, you can shoot a decent score."

Lowry tees off at 7.41 tomorrow with Tyrrell Hatton and Patrick Cantlay.

Shane Lowry
The Open
Carnoustie
2018
Previous
Tiger Woods: My new TaylorMade putter will help me at The Open
Next
Woods bags new GAPR 2-iron at Carnoustie