LPGA player cleared of penalty, then docked one stroke after video review

Yet more golf rules controversy at a golf tournament. 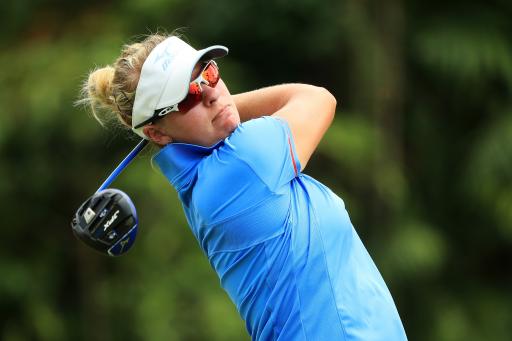 Just when we thought golf rules were turning a corner, LPGA Tour player Nicole Broch Larsen was assessed a one-stroke penalty for causing her ball to move at the weekend - despite initially being cleared of the violation by an on-course official!

Broch Larsen, 23, sought a ruling from an on-course official when she thought her ball had moved on the 17th hole and was cleared of any misdoing, ending the day at 7-under par and one stroke ahead at the time.

Unfortunately, she was later informed that a video review of the situation revealed that she had in fact caused her ball to move - a violation of Rule 18-2, which carries a penalty of one stroke. Because she was following the direction of the on-course official at the time of the violation, she wasn't assessed an additional stroke for playing her ball from the wrong spot.

The so-called "Lexi Rule" that limits the use of video in rulings was not applicable in this situation, because Decision 34-3/10 only protects players from violations that could not be reasonably seen by the naked eye, or when players are required to use their best judgment to "determine a spot, point, position, line, area, distance or other location on the course to use in applying the Rules."

Thankfully, the penalty didn't end up affecting the outcome of the tournament, which was won by Sung Hyun Park at 11-under. Broch Larsen ended up tied for 12th at 5-under.