Police were unimpressed when they arrived to find the shirtless man teeing off. 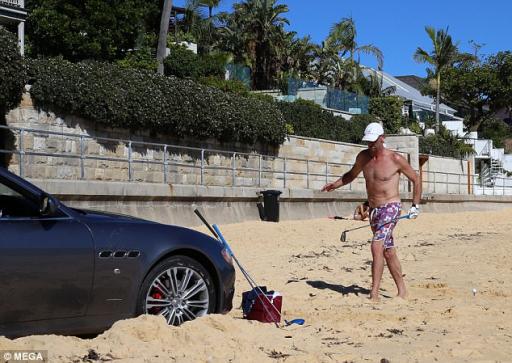 Now here's something you don't see every day... a man driving a luxury Maserati sports car onto a beach, before smashing balls out into the sea while pumping Bob Marley tunes and smoking cigarettes.

Shocked witnesses watched on as the man beached his Maserati Quattroporte, worth an estimated $120,000, at Camp Cove in Sydney's Watsons Bay.

After a conversation with three police officers who responded to the call, the shirtless man opted to put his 9-iron back in his cart bag and slip on a blue polo shirt.

One shocked witness told the Herald Sun the man was "off his head" and screaming at other people on the beach.

The man has been taken in to hospital for assessment.

Perhaps the guy just wanted to work on his bunker play - after all, the long bunker shot is the hardest shot in golf...

Golf Instruction Tips #1: How to play the 50... by GolfMagic

maserati
Australia
maserati driver heads to beach to play golf
bob marley
Previous
Page 2: Get the takeaway on plane
Next
How to putt like Jordan Spieth