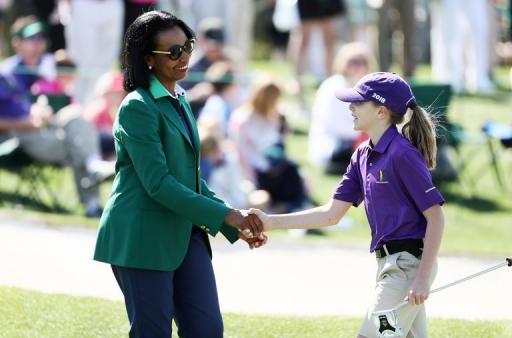 Condoleezza Rice, left, who was among the first women to become members of Augusta National, with a participant in the Drive, Chip and Putt Championship at the club on Sunday

Golf would finally appear to be getting with the times as Augusta National, which did not allow women members until 2012, has confirmed it will host a 54-hole Women's Amateur Championship in 2019.

Almost 16 years ago, when the Augusta National Golf Club became a battleground over its exclusively male membership, it was hard to imagine that the club’s chairman would one day support women’s golf in a groundbreaking way.

As the home to the Masters tournament since 1934, Augusta National’s grounds are hallowed because they remain mostly unchanged and famously inaccessible. Policies at the club have been amended at a glacial pace; the first female members were not admitted until 2012.

But on Wednesday, Fred Ridley, in his first major appearance as the new chairman of Augusta National, unexpectedly announced the club would create and help host the Augusta National Women’s Amateur Championship from April 4 to 6, 2019.

The 54-hole tournament will be played the week before the 2019 Masters.

The first two rounds will be played at Champions Retreat Golf Club near Augusta, and then a cut for the lowest 30 scores will see those players compete at Augusta National in the final round on the Saturday.

The timing of the tournament could present some of the world's best women amateurs with a dilemma because the first major championship of the season - the ANA Inspiration - is traditionally played the week before the Masters.