Matt Wallace FUMING with negative comments after playing second round

Wallace hits back at critics after playing golf when his day-one playing partner Denny McCarthy had contracted coronavirus... 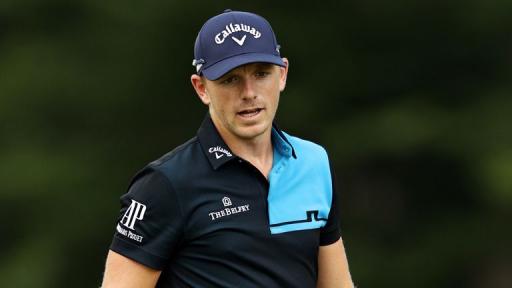 Matt Wallace has taken to social media to reveal his frustration at the negative comments he has seen written about him from some golf journalists after he made the decision to continue playing the second round of the Travelers Championship, despite his first-round playing partner Denny McCarthy testing positive for coronavirus.

Wallace, 30, also spoke about receiving some dirty "looks" from other players when he was out on the course playing on his own on Friday, as his other playing partner Bud Cauley had chosen to withdraw from the tournament out of precaution. Both Wallace and Cauley had tested negative for coronavirus.

My thoughts of today over on Instagram @PGATOUR pic.twitter.com/bqa67uyUHu

"I've seen some not very nice things written about me," said Wallace, who went on to miss the cut on 2-over par following a second-round 72.

"There have been some very negative things said about me, when actually I feel like I've not done anything wrong really.

"I'm just like everyone else playing out there. I tested negative and I took it solely on myself.

"If the test isn't as conclusive as we are led to believe, then I completely agree then I would not be out there. I tested negative and I am safe, and I can go out there and play."

After his second round, Wallace was approached for comment, where he voiced similar opinion to his social media video post.

The Englishman was annoyed that the PGA Tour made him play the second round on his own, however.

"I don't think I should be in any way a negative here," he said.

"I don't think I should be put in that spotlight at all. I've done everything else that any other player has done and I've tested negative. I'm in the same boat that they are.

"It's up to me, so clearly it's my decision. I mean, it's black and white in my situation. I stayed well clear of them yesterday, no fist bumps, none of that. And I've done everything at home that I have done the last three weeks while testing negative.

"I just got some food, stayed in the hotel room, came up here, got tested, tested negative, Dave [McNeilly, caddie] tested negative, we're all clean, we went out and played, that's pretty much it for me.

"But I said to Dave on the first hole, it's just nice to know that we're okay and we're just playing golf. I mean, there's much worse things than missing the cut, isn't there, at the moment? It isn’t the end of the world

"I tested negative and I can go play. Just a bit frustrated thinking would someone like Dustin Johnson or Rory McIlroy play on his own? I doubt it.

"So they could have dropped one of the players back from in front or maybe from behind to go ahead and play with me. Just don't think it was a great move to leave someone out on their own in the middle of the pack."