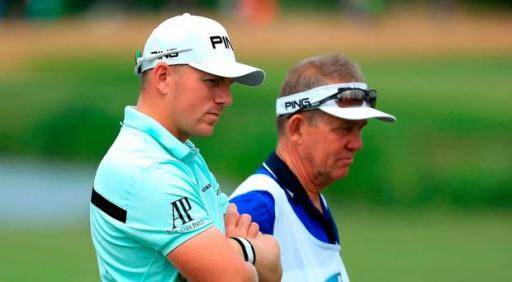 Matt Wallace has come under fire by golf fans on social media following his on-course behaviour and treatment of his caddie Dave McNeilly during the final round of the BMW International Open.

Wallace, 29, was seen tossing his clubs into the turf and throwing them around on multiple occasions, on top of hurling what appeared like verbal abuse to his caddie McNeilly when going long at the par-3 12th - a shot that led to a bogey and took Wallace out of a share of the lead at the time.

FEATURE: IS CADDIE ABUSE GETTING OUT OF HAND ON TOUR?

The four-time European Tour winner needed a birdie up the par-5 18th to force his way into a playoff, but any hopes he had of defending his title were soon sunk after finding the water down the left side.

Upon walking up to see exactly where his ball had ended up, Wallace looked to once again be fuming with his caddie despite his own errant shot with the driver.

While cameras could not pick up exactly what Wallace had to say to McNeilly, his choice of words did not look particularly pleasant - and it led a number of golf fans to rush to Twitter to express their disgust at what they were witnessing...

I watched him play the 18th and this is the only dialogue with the caddie on my DVR pic.twitter.com/tbPXZReTmS

Why is matt Wallace having a go at his caddie. Again caddies not being respected. Disgusting

Matt Wallace wants a fucking good hiding. I don’t care who they are, if he spoke to me like that he’d be carrying his own bag at best. If not tasting a 7 iron. #prick

Four wins early on in his career but now twice when in a very strong position to win a golf tournament Matt Wallace has snatched defeat from the jaws of victory.
He absolutely hates it and it shows.
Bit of a worry.#BMWInternational

Matt Wallace assaulted his caddy after his tee shot on 18. Please watch the footage. Also, the verbal abuse was disgusting. This guy should be banned from the tour. #BMWInternationalOpen #PGA

Questions over Matt Wallace temperament in big tournaments. Seems to blow up majorly for me. Can win but at elite level has yet to prove himself with the top players

Matt Wallace’s attitude is worse than Matt Fitzpatrick’s. Quite an achievement tbf.

I wonder how many golf clubs Matt Wallace breaks on average per year? My guess is 27.

I cannot stand Matt Wallace... absolute grade A bellend!! Caddies fault he hooked a drive on 18 into the water!

That wanker Matt Wallace up to his usual antics today. Burying his club in the fairway there. Caddy should tell him to fuck off. #BMWInternationalOpen #Golf

@NickDougherty5 @ewenmurray77 What’s your opinion on Matt Wallace verbally & physically abusing his caddie on the 18th hole in the BMW?

Matt Wallace is quickly becoming the most dislikable golfer out there. Maybe it’s his desire to win and strive for perfection, but there’s no need to be an absolute tit when things go wrong from time to time.

Wallace went on to make a bogey at the final hole to finish in a seven-way tie for third on 13-under par, a result that marks his third top-five finish in his last five tournaments.

The 29-year-old currently leads the European Tour's Race to Dubai standings and has moved up to a career-high 24th in the world rankings.