Mickelson has a mare at Sawgrass, social media blames his new button-downed shirt

Phil Mickelson opens with 79 at Players, but Lefty loves his new shirt. 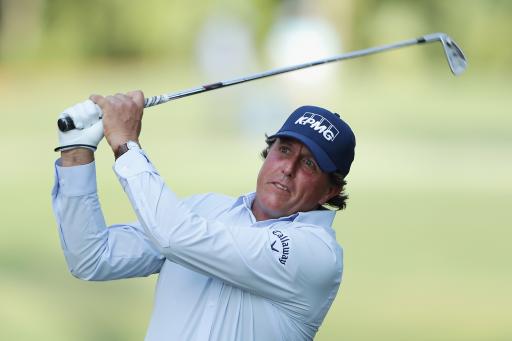 Phil Mickelson opened with a disastrous 7-over 79 at The Players Championship, but quickly put rumours to bed that his new button-downed Mizzen + Main shirt had anything to do with the score.

“This stuff is stretchy, you don’t even know it’s on,” said Mickelson, who despite playing the first 13 holes in level par, finished double, bogey, double, double, par.

“It’s very comfortable, so I actually really like it. I think nobody does kind of slightly overweight, middle-aged guy better than me, and this says exactly who I am.”

Mickelson, who shot the fourth worst score of the day and was one of 24 players to find water at 17, attributed his poor play to a lack of energy - but he certainly plans to give his newfound clothing partner a few more chances to shine at tournaments later this year.

“We have polo shirts and everything. I just like this (style),” said Mickelson, who ranked 107th in driving accuracy and 130th in greens hit on day one at Sawgrass.

“It says that if you can play golf at the highest level, imagine how comfortable it is in the office and so forth. It’s very comfortable. I love it. I’ll wear it a lot when it’s cooler. I have some polos I’ll wear later on.”

But social media was having none of it. In fact, we've yet to see any positive comments at all where Mickelson's new fashion sense is concerned...

85 degrees but Phil Mickelson out there in a long sleeve button down shirt pic.twitter.com/uFJ0AljtxK— Born Salty (@cjzero) May 10, 2018

Phil Mickelson is five over on the last 3 holes, plus the 2-shot penalty for that hideous shirt. #PlayersChampionship— Rick Reilly (@ReillyRick) May 10, 2018

Walking around Florida in the spring/summer in a dress shirt is hell on earth and Phil Mickelson is voluntarily choosing to do it while playing golf. pic.twitter.com/LHN2UBTuDo
— Will Brinson (@WillBrinson) May 10, 2018

Lol maybe Phil Mickelson wouldn't be +7 if he didn't wear that weird ass long sleeve shirt in 85° weather. But then again, maybe he would be. #ThePlayersChampionship— Molli Ronish (@Molli_Ronish) May 11, 2018

Soooo... Phil Mickelson is really wearing a long sleeve, button-down collared business shirt, with cuffs -- at the 1st round of the #Players today? Couple things.. -Such a bad look- In hot & muggy Florida - how is it even comfortable?#GolfFashion— Erin Hogan (@ErinHogan) May 10, 2018

Rory McIlroy carded a 1-under 71, while Tiger Woods bogeyed the final hole for a level-par 72.

Jordan Spieth's struggles continued at Sawgrass with a 3-over 75.