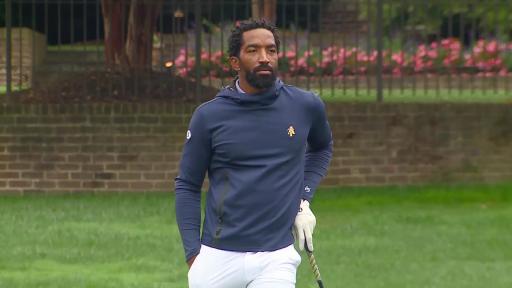 Two-time NBA champion JR Smith carded a 12-over 83 in the first round of his NCAA debut at the Elon Phoenix Invitational at Alamance Country Club.

Smith, 36, started his round strongly with two birdies over his first five holes but soon tumbled down the leaderboard with four double bogeys and six bogeys to finish tied last after the first 18 holes.

The American played in the NBA for 16 years and won titles with the Cleveland Cavaliers in 2016 and Los Angeles Lakers in 2020.

LA Lakers legend LeBron James gave Smith a shout out during his first round.

HOW AMAZING IS THIS MAN!!! DAMN IM BEYOND PROUD OF MY BROTHER! https://t.co/i4Vsi8Pskk

Smith, who says Tiger Woods, Dustin Johnson, Brooks Koepka and Justin Thomas are his favourite golfers on the PGA Tour, recently enrolled at North Carolina A&T as a freshman walk-on.

Elon’s Pedro Rabadan led after the first round with a solid 6-under 65.

While a disappointing start for Smith, he is more than qualified for the step up to college golf.

Favorite part of JR Smith's college debut is that he looks damn good doing it. pic.twitter.com/WlCNZ8cCvk

According to the school, "all A&T golfers must qualify for each tournament in practice unless the golfer finishes first or second on the team in the previous tournament."

Smith qualified for this tournament by one shot.

His head coach Richard Watkins said: "He has a good enough golf game to put up some good numbers, but this is what I tell people. If you want to find out how good a golfer really is, put the word tournament or money in front of the round.

"Playing when there is nothing on the line is one thing. But, put meaning to it, and the heart rate changes. The grip on the club changes, and we get to see who you really are.”