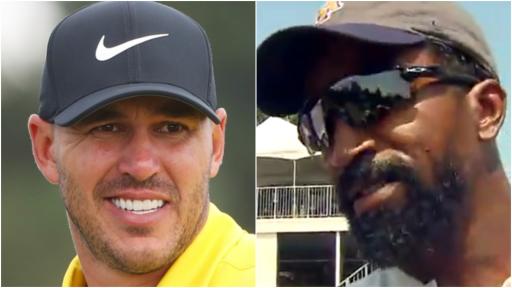 Smith, who has won basketball's biggest prize with Cleveland Cavalirs in 2016 and LA Lakers in 2020, has enrolled at North Carolina A&T, and if cleared by the NCAA, plans to play on the HBCU's golf team.

Koepka, who is taking a break this week ahead of next week's Northern Trust that marks the start of the FedEx Cup Playoffs, took to Twitter today to congratulate his friend.

Smith is reportedly playing off a 5 handicap as it stands.

The two-time @NBA champ is enrolling @NCATAggies with his sights set on the golf team.

Got to learn from the best! https://t.co/5Op0KVexc0

"Ray Allen kind of convinced me," said Smith, who competed in the Wyndham Championship Pro-Am on the PGA Tour.

"We had a little golf trip in (the Dominican Republic) and he was talking about some of the things he was doing, about going back to school and challenging yourself for us athletes.

"I really took heed to it and decided to go back – and one of the best liberal studies programs is at A&T."

He added: "I’ve got no free time now. Raising kids and going to school, my schedule will be full. I can’t wait to be a part of the HBCU family.

"I’ve really been embraced by everybody so far on campus. I’m looking forward to start going to football games and repping Aggie Pride."

NEXT PAGE: WHAT IS CALLAWAY'S TRIPLE TRACK TECHNOLOGY ALL ABOUT? WATCH OUR LATEST VIDEO TO FIND OUT MORE