World No.1 Nelly Korda proved her class on day two of the Women's Olympic Golf Tournament 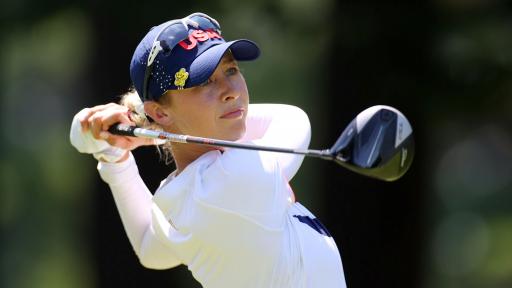 World No.1 Nelly Korda put one hand on an Olympic gold medal by firing a round of 9-under par on day two of the Women's Olympic Golf Tournament in Tokyo.

Korda, 23, made nine birdies and an eagle to set up a chance of an historic round of 59 with a birdie up the final hole, but she unforunately double-bogeyed it for a round of 62.

Nevertheless, the in-form American, who won her maiden major title at the Women's PGA Championship in June, moved into a commanding four-shot lead on 13-under par.

"I think when people ask me if I prepare more or put more meaning than normal (into) majors or Olympics or whatever, I say, 'no', because I go into any type of an event with the same demeanour and the same goal," said Korda, who is bidding to make it a 1-2 for Team USA in Olympic Golf following Xander Schauffele's one-shot victory in the men's tournament last week.

@NellyKorda double bogeys 18, but still posts the best round of the week and leads by 4 at 13-under.#Olympics #Golf pic.twitter.com/UGx5WOeVFE

Ireland's Leona Maguire carded a solid 67 to progress to 4-under par, one shot ahead of South Korea's defending champion Inbee Park who carded a round of 70.

Great Britain will unlikely have much of a say on the podium as Jodi Ewart Shadoff sits at level par, with Mel Reid on 6-over par.

Korda's compatriot Lexi Thompson carded a second-round 71 to remain at 1-over par, and she had Drew Hinesley, who is working with NBC in Japan, on her bag after her normal caddie Jack Fulghum continues to recover from heat exhaustion during day one.

The tournament is still expected to be staged over four rounds, but a tropical storm is expected to hit Kasumigaseki Country Club at the weekend meaning it could possibly be a 54-hole event pending the weather.