Ladies World No.1 Korda off to slow start on day one... 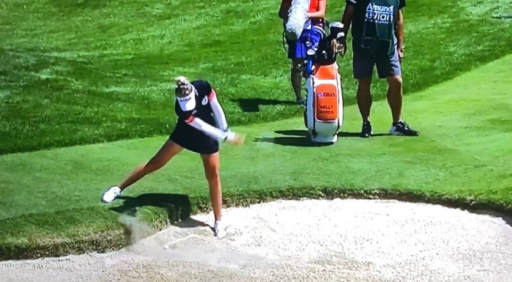 Ladies World No.1 Nelly Korda got off to a tough start on day one at the Ammundi Evian Championship as she opened with a round of 3-over 74, which included a whiffed bunker shot on her final hole.

Korda saw her ball rest up against the back of the bunker on the par-5 9th, her final hole of the day, and she unfortunately clipped the bank on her downswing contributing to an air shot.

Yikes! Nelly Korda just missed the ball entirely out of a bunker on her last hole, hitting the bank first on a difficult shot. pic.twitter.com/C50Uy3am8Q

Nelly Korda just took a stab at a bunker shot where and ended up missingthe ball entirely pic.twitter.com/ak2644fQac

She then chose to come out sideways and it would lead to a bogey-six finish and round of 74, leaving her nine shots off the pace currently set by Yealimi Noh and Pajaree Anannarukarn on 6-under par as things stand.

"You know, you can hit good shots and you get a really bad bounce and you’re just in an impossible position," said Korda, who won her maiden major title at the KPMG Women’s PGA last month.

"You can hit a bad shot and it trickles up there and you sink it for birdie. So it’s more of just like a mental aspect and also just knowing where to miss."

In-form players Hyo Joo Kim and Ariya Jutanugarn got off to solid starts with rounds of 4-under 67, one shot ahead of Lydia Ko.

Bandon Dunes is set to HOST 13 USGA championships in the next 24 years!