Nicolas Colsaerts was brought to tears after he ended his seven-year winless drought by winning the Open de France. 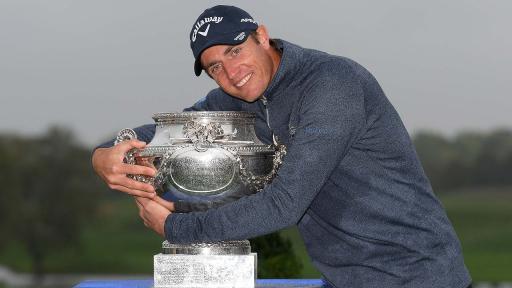 It's been a frustrating few years for Nicolas Colsaerts, who hadn't won a European Tour title since 2012, the same year he was picked as a wildcard by captain Jose Maria Olazabal as Team Europe pulled off the historic 'Miracle at Medinah', but after a long seven-year winless drought, Colsaerts is once again in the winners' circle, claiming the Open de France at Le Golf National.

It proved to be a difficult final day for many of Europe's elite and although Colsaerts shot a one-over-par closing round of 72, it was good enough to beat Denmark's Joachim B. Hansen by one shot in France.

It was a timely win for Colsaerts, as the Belgian started the week 114th in the Rcae to Dubai rankings and was in danger of losing his Tour card and the final round on Sunday was packed with drama.

Colsaerts regained the lead when he chipped in for eagle on the 14th, but he handed the lead straight back to Hansen at the next after finding the water and finishing the hole with a double-bogey six.

Hansen failed to capitalise and found a double bogey of his own at 17, allowing Colsaerts to tap in for the win on 18. The win moved Colsaerts from 424th in the world to 196th and the emotion came flooding out of the big Belgian as he spoke to Sky Sports after his round.

"I've been coming here for I don't know how many years, it's been a long road, " said Colsaerts.

"So many people have supported me over the years, that's why I get so emotional. I went through ups and downs for so many years now."