A 13-year-old was driving the pickup truck that struck a van in West Texas, as seven members of the USW golf team, and nine in total, are killed. 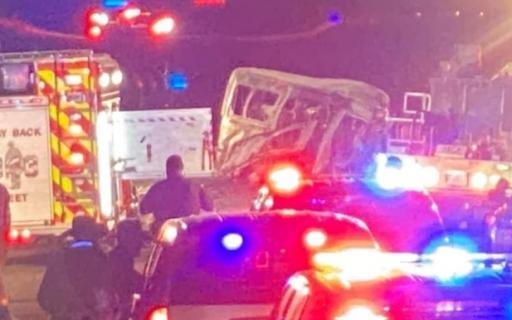 The National Transportation Society Board (NTSB) has confirmed a 13-year-old was driving the pickup truck that crashed into a Ford passenger van that was carrying six golf students and their coach from the University of the Southwest on Tuesday, according to the Associated Press.

Prospective drivers must take classroom courses in Texas at 14 years old and must be 15 years old to receive a permit to drive with an adult or driving instructor.

Department of Public Safety Sgt. Victor Taylor said a 13-year-old driving would be breaking the law.

The tragic crash killed nine people, including six USW golf students and their coach, as well as the driver of the pickup truck and a passenger.

BREAKING: A National Transportation Safety Board spokesman says a 13-year-old was driving the pickup truck that collided with a van in Texas, killing nine people, including six New Mexico college students and a golf coach. https://t.co/DFI4WHKDLm

According to reports, the truck's left front tyre, which was a spare, blew out before impact.

Both vehicles are said to have been caught on fire.

The golf teams were traveling in a 2017 Ford Transit van that was towing a box trailer when it collided with the truck.

The two vehicles reportedly collided on a two-lane asphalt highway where the speed limit is 75 mph (120 kph), though investigators have not yet determined how fast either vehicle was travelling.

Related: Six golfers and their coach die in tragic car crash in Texas

The crash happened at 8.17pm on a two-lane road some nine miles from Andrews, Texas, according to officials.

Eight of the nine people killed in the crash have been named by investigators.

Two of the golf students on board the van, Dayton Price and Hayden Underhill both survived and were airlifted to hospital where they are reportedly recovering from injuries.

This donation site has been created in support of the victims and families.https://t.co/vkXS7gdSb9 pic.twitter.com/NHsBv8eKUn

Henrich Siemens, 38, and an unidentified 13-year-old who was with him in the pickup truck also died.

"For unknown reasons, the Dodge pickup drove into the northbound lane and struck the Ford passenger van head on. Both vehicles caught fire and burned," said the Texas Department of Public Safety.

The USW golf team had been returning to campus following a tournament in Texas when the crash happened.

The University of the Southwest is a private, Christian college located in Hobbs, New Mexico, near the state's border with Texas.

Our thoughts are with all the families and friends connected with this tragedy. RIP.