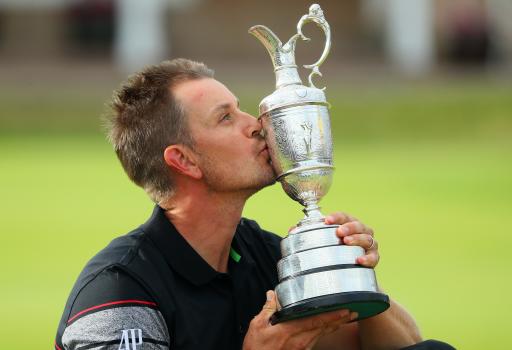 Henrik Stenson has won his first major following an epic battle with Phil Mickelson in the 145th Open at Royal Troon.

The Swede posted a final round 63, featuring 10 birdies and two bogeys, compared to Mickelson’s outing of 65.

IN THE BAG: HENRIK STENSON

Stenson's final score of -20 is the lowest score in Open history, and he also tied the lowest total in relation to par in a major.

"This will take a while to sink in, I am still getting my bearings," Stenson said.

"It seems like it was not going to be anyone else but the two of us. I am delighted to come out on top. Thank you very much for a great fight.

"I want to thank my wife, my family, my team, all the hard work has helped to make this possible and my caddie Gareth Lord.

"I lost a dear friend on Wednesday morning in the States from cancer and I feel like he has been with me all week, Mike this one is for you."

On Mickelson, he added: "It was great, in a small way it makes it easier because you know he's not going to back away. I had to play at my best to get it over the finish line."

Five-time major winner Mickelson, who won the Open in 2013 at Muirfield, started the day one behind Stenson, and finished three shots adrift at the end of play.

"I played well enough to win by a number of strokes and got beat. I'm happy with the way I played, but disappointed it wasn't enough," Mickelson said.

"I played a bogey-free round and shot 65 in the final round of a major, usually that's good enough to do it. And I got beat."

The titanic tussle brought back memories of the Duel in the Sun between Tom Watson and Jack Nicklaus in the 1977 Open at Turnberry - generally regarded as one of golf's most enthralling battles.

"That was links perfection, we will never see a greater pairing on a final group as long as we live, 65 for Phil and 63 for Henrik," Faldo told the BBC.

"That golf was incredible. You don't see a scoreboard like that, where were the rest of the pack? These two guy have lapped them. What a way to win your first major.

"Mickelson will hurt but at least he didn't lose it, Henrik won this fair and square. For this week both of them were on a different planet."