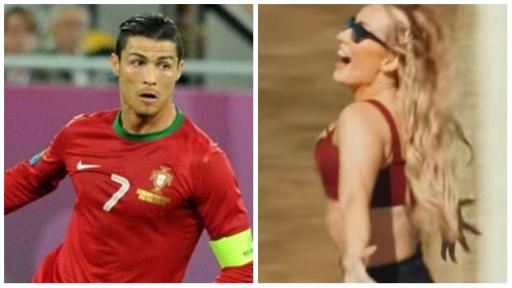 Spiranac, who has more Instagram followers than any other golfer on the planet including Tiger Woods (3 million), joined up with PointsBet USA where she is an ambassador to try out some legendary football celebrations.

The most notable one was Cristiano Ronaldo's famous 'SIUUU' celebration, made iconic during his days at Real Madrid, Juventus, Manchester United and Portugal, whom he captains at the World Cup.

Paige does not quite have as many Insta followers as Ronaldo, however, who comes in with a sports-leading 506 million.

The big confession was that he did not have any respect for new Manchester United boss Erik ten Hag.

TONIGHT: Cristiano Ronaldo parts ways with Manchester United and the Glazers could follow after the most explosive interview of the year.

Get all the latest developments and reaction on Piers Morgan Uncensored at 8pm.@piersmorgan | @TalkTV | #PMU pic.twitter.com/RCMwhNgHFP

It is now understood Ronaldo is close to a huge £173 million-a-season deal with Saudi Arabian club Al Nassr.

This was something we discussed in a recent feature.

She's not much of a fan of it, though.

To Paige's delight, the USA defeated Iran 1-0 in their final group game to finish second in Group B behind England.

That means they qualify to the last 16 of the World Cup where they will now face the Netherlands on Saturday.

Earlier this week, Spiranac posted an Instagram Reel of her Best Golf Outfits ahead of 2023.

Paige was modelling outfits for when she visits a Country Club, Public Golf Course and when she is just an IG Golf Girl.

Next Page: Jon Rahm comes out swinging for LIV Golf as he defends Phil Mickelson